Using Fibonacci to set your levels

I will use a EURCAD chart to try to explain how I use fib levels to determine my risk and trade entries .

I’m using a current chart of EURCAD as I have had two successful trades using the levels that I about to example .

Firstly a drew a fib from the last October swing low (Fig 1) . This was not the actual October low as price was muddled at the start of the month with no discernible price level from which to draw. The high is marked as A.

Price dropped from A and halted at the 61.8% of the move (B). This is where I opened my first long trade. It particularly appealed to me because of the sharp rejection and the very bullish candle structure at the level.

An additional fib was then drawn from B to A (shown in Fig 2) and I looked for a level to close my long trade. Price action was bullish and came to a halt around the area of the 38.2% of A-B (marked C on the chart). I opened a short trade here, but admit to getting out too soon as we bounced at the 50% of B-C .

The chart below shows where we are at the time of writing. No trade open as yet. I have drilled down further and placed a new set of fibs from B-C. The smaller the swing the more difficult it is to trade from the fib levels – So this will be interesting going into the next session as price is ‘bunching’ and undecided .

It is also useful to keep the fibs from previous larger swing levels on your charts. In this way you are able to view fib clusters that can give a good indication of price turns, twined with Support/ resistance levels and candle combos . 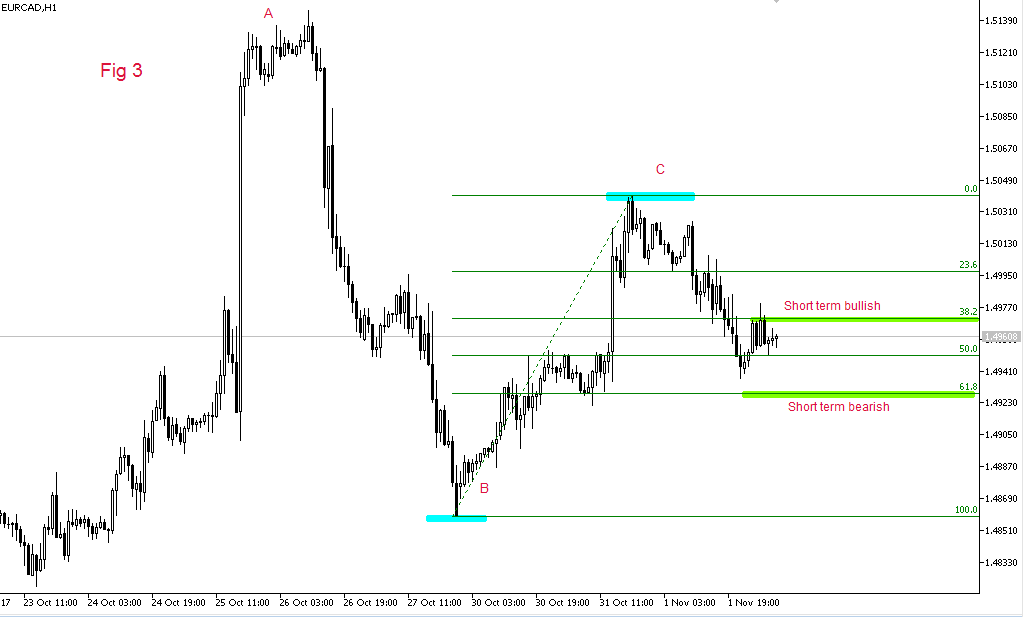