USDJPY still going despite US bonds easing back from 3%

The US dollar is now stepping out from the shadow of US bonds. 10’s have edged back a touch from the 2.996% high to 2.981%. Not a big move but it’s showing the level of resistance up here at 3%. That hasn’t stopped the dollar from carrying on and we’ve seen USDJPY touch a high of 108.26. The dollar remains on the front foot against pretty much everything else.

There’s a few old lows to deal with up here in USDJPY, from the Feb break. One area to watch is around 108.50, which has been a significant S&R point all the way back to 2016. 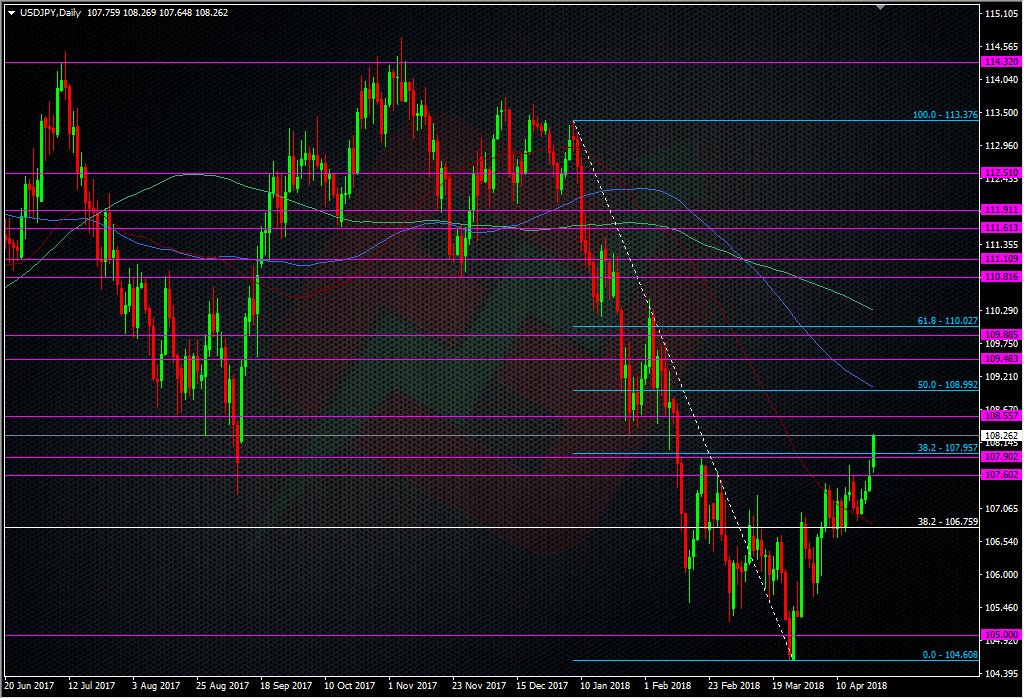 This is going to be another key level for this USD strength we’re seeing. Above there, the 109.00 is looking strong technically too.

I’ve been a bear in this pair for quite some time now and have seen no fundamental reason for that to change over the last few months but we might now be seeing a change in the tide. The US is still ticking along at the same rate and the Fed are still waiting for inflaiton and wages to rise further. Just taking things from the US side, there’s no real change in the fundamentals. What might be changing this tide is weakness in other countries fundamentals, like the UK and EU, where data has been softer. What you have to remember with markets at the moment (and what’s been the theme for this year so far), is that money has been on the hunt for better returns. One of those trades has been out of the US and into other rising growth economies, like Europe. The problem comes when that growth looks like faultering, and then we see some of the money going back the other way. When that happens it’s almost a safety trade but in the sense of safer returns rather than geo-safety. If money sees Europe and other countries growth spluttering, and then sees the US showing stable solid growth, flows will come back to the US because it’s seen as the lower risk trade as returns are likely to be sustained, hence why we’re seeing the dollar higher inline with US bond yields, rather than falling as yields rose (like we saw at the start of the year). This is the type of move we expect to see when US fundamentals look solid.

So, there are some signs that this could be a turnaround but it’s still early days yet. This latest move seemed to only creep up on us late last week so no-one should be calling for a complete USD turnaround after 3 days. What we need to do is watch the charts and see how the levels perform. If we do see a decent recovery in the dollar, then the big 114/115 area could come into play again but there’s lots of hurdles to get over before then.

While I’m yet to believe this is a real game changer, we can’t ignore that USD is in a buy the dip mode, so it’s always wise to be mindful of the the bias when putting your trades together. Shorts may be lapping this up but they’ll need to keep things tighter, while buyers may be able to give their trades a bit more room.