With the market pricing in a near 100% chance of a BOC rate hike today, do we have anything left to trade?

When looking to trade central bank events I like to leave things until the last moment. Why? I have to see how the price has developed. In the case of the BOC we’ve had some clear moves. USDCAD dropped near the end of June on one thing and one thing only, the market perceiving a clear message from the BOC that a hike was coming. Hike odds zoomed higher and everyone loaded up on CAD. We basically had the “pricing” of today’s expected hike. Then we moved on to trade the everyday stuff.

Where are we at today?

To make it simple, the 1.3380’s is the pre-increased hike expectations high and 1.3050’s is where the market finished pricing. Where the price is now determines where, and what I’d like to trade. I’ve been thinking about a few trading ideas.

The first would have been to look at longs into the BOC IF the price had still been in the low 1.30’s. It’s a big fat round number and has been prior strong S&R. With expectations so high, there would have been very little room left in the hike trade so a (CAD) buy the rumour, sell the fact trade was my plan. Now we’ve moved away from that low, it’s put us a bit in the middle of things, which leaves some scope to see a good kneejerk dip as USDCAD shorts will want the price back down into the 1.30’s.

The second idea is to now look to sell into today’s rally to catch that kneejerk move, and also with a view to then reverse it if/when it hits my designated support levels. Given the volatility in this pair, we could be looking at anywhere from 100-200 pips, so that 1.3000 level looks good with the price currently at 1.3167. 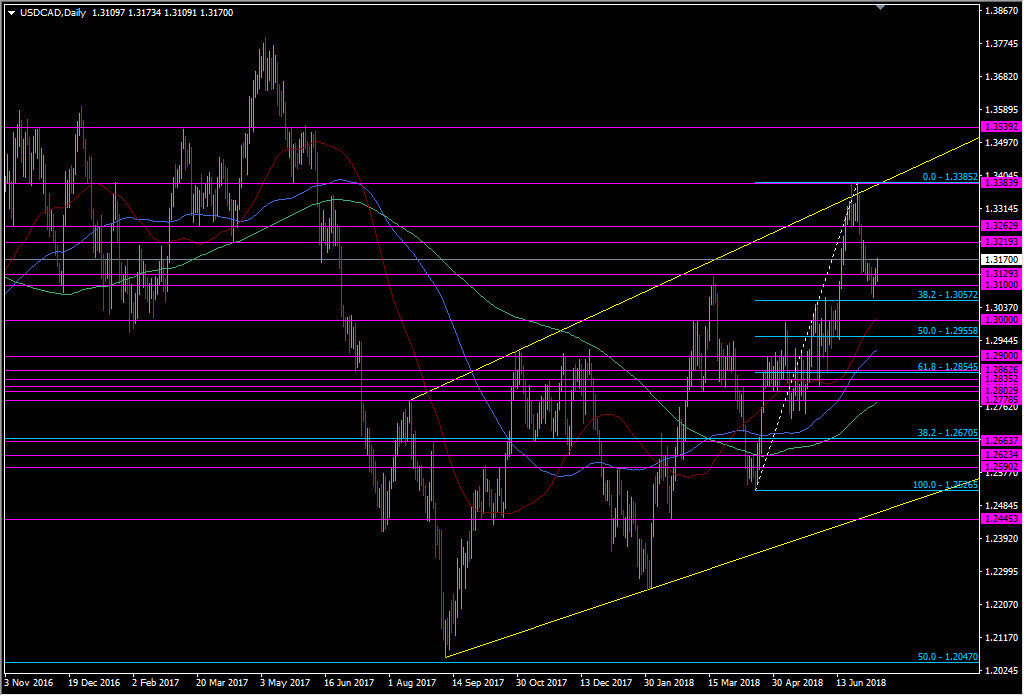 The last idea is to cover the biggest risk for today, and that’s if they don’t hike. Because the market is factoring in a hike, the biggest price move will come if they don’t hike. So, my idea for that would be to maybe play my short into the BOC but have a stop reverse some 50 (or more) pips higher. Of course, I could even simplify things further by going with stop entries either side of the market into the announcement. This is one pair where that strategy stands a good chance of working due to the volatility but it’s not fool proof and there’s a chance of getting whipped out.

Because this meeting comes with a presser, that’s going to inject additional volatility because whatever happens in the announcement, the market is going to want to know what’s coming next, and with Poloz being the flip-flop merchant he is, that could mean anything. Idealy, I’d like to capture any moves before the presser risk.

Poloz hasn’t been shy in saying he doesn’t like forward guidance, and that’s become clearer and clearer in his language. Long time readers will know I’ve been saying he changes his views like the weather for some time but he seems to be stepping up that nuance. I love it to be honest. Central banks mollycoddle markets too much these days. Poloz’s style is the single reason the CAD is so volatile and that’s great for trading. Yes, it increases our risk but it also increases our potential rewards. If you think that a Fed hike would be lucky to bring us a 20 pip move these days, knowing that there’s potentially 10 times that in CAD is a trader’s dream, as long as we plan for it accordingly.

So, is a hike a slam-dunk today? I’ve probably got a bit more caution on that than the market has. With trade wars still ongoing and NAFTA still up in the air, there’s no way Poloz is going to brush all that under the carpet so expect him to pay it some large lip service. The economy seems to be holding up fairly well and inflation looks sustained. That’s all plus points for a hike. The question will be how big a problem Poloz sees the trade spats developing into and how that would hit the economy. If anything, that gives him the perfect opportunity to bank some extra rate margin now in case things turn sour later. But, don’t rule out the possibility that he’ll take the problems as a reason to be cautious about hikes.

At the end of the day, it matters not what I think about the BOC or the economy, nor what anyone else thinks. We’re traders not economists and we’re putting our money on the line to trade this event. All that matters is that we plan our trades so that our risks are minimised and manageable. It’s ok to get a trade wrong but it’s not ok to lose more money than we would want or expect because of bad planning.

Good luck to you and let us know how you’re going to trade it, if you are.