GBPUSD rips up through 1.3600 as BOE hike hopes increase

A day and a morning has seen cable gain over 450 pips. For September so far we’ve done a good 700+ pips.

The rally has come hot on the heels of stronger inflation numbers and a hawkish BOE MPC meeting. The BOE rally has had more fuel thrown on the fire by BOE MPC member Gertjan Vlieghe, who today said that “The time to raise rates is getting closer” A known dove, his hawkish comments helped kick the pound through 1.3450 and 1.3500;

We’ve seen buyers piling in, some big stops blown, and some long-term shorts covering as the move took out the much watched 50 fib of the Brexit swing at 1.3500. 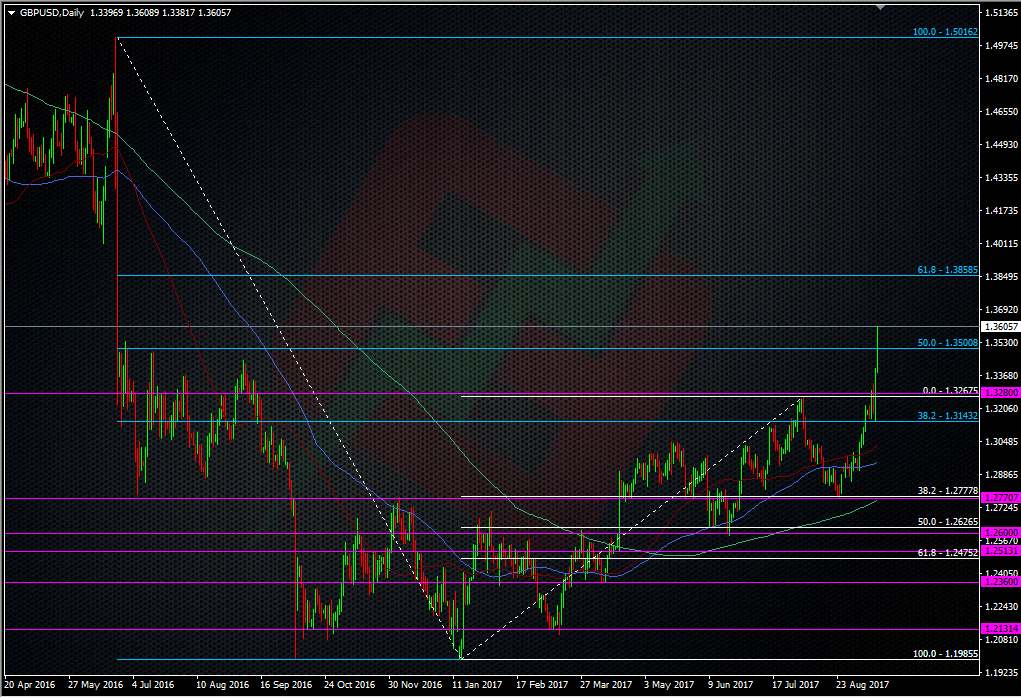 It’s not just the BOE or rate UK interest rate expectations that are causing this move. There’s been hefty yen selling in the crosses which has helped give a shove to the majors. No doubt the overnight North Korea missile launch over Japan has shaken a few feathers again, and raised more questions about whether Japan is a real safe haven in these times. Other currencies like GBP, EUR and AUD might be better choices for investors.

Technically, the break up in GBPUSD has made the picture unclear, as we’ve got a huge amount of open space above the 1.35 level. We’re eating into to the Brexit drop, and that was a monster move. For now, dip buying is likely to be the way to play it but we’re going to have to let the levels develop. If 1.3600 starts showing better resistance now, that might see some of the latecomers taking profit and we’ll see a move back down towards 1.3500. 1.3550 and 1.3525 are two possible stall points were we’ll see support coming in. A test and hold of 1.3500, say round 1.3510 will show where the real dip buyers are.

As with all big moves like this, it’s not for chasing. Let the price action show you were the levels are and trade them accordingly. For now, I’ve taken a small short at 1.3594 with a stop just above the 1.3615 highs.