Tonight sees another round of votes in the House of Commons and MP’s get to vote on the motions May put forward yesterday. They were to give Parliament a vote on an extension and no-deal. These motions are still tightly bound to May’s deal, in such that her deal is still the only viable one on the table. It is basically pushing the end game to Parliament (which it always wanted but could become the poisoned chalice for deciding whether there’s a deal or no-deal). The Guardian has a useful graphic on the how May’s motions (if passed) will play out. 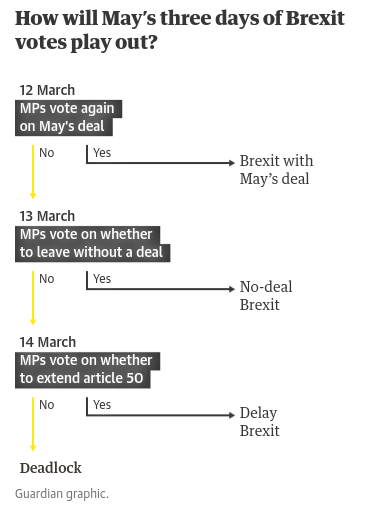 May’s motions are expected to pass without much fuss so there’s probably little market risk for tonight but there are also other amendments that will be pushed forward for selection;

There’s a couple of other minor amendments and “notes” that might get put on the table but nothing game changing. Remember also that it’s the speaker who chooses what amendments will be up for vote tonight so it could be all, one or none but it’s likely that some of the main one’s above will be chosen. However, the amendments can be changed and/or pulled ahead of tonight as deals are struck behind the scenes (see the Costa amendment above). All this is due to kick off from around 19.00 GMT.

Regarding the other big news on the 2nd referendum, it’s important to be clear about what Labour will be trying to push for because I’ve read a lot of misinformation on it. By proxy it will be an in or out vote but the actual question to go on the ballot paper is still unknown. Labour is basically fighting May to the last, not for the good of the country but purely for political gain. Their referendum would likely be a question of May’s deal or remain, and they have been spinning May’s deal as bad since the get go. They would fight it even if it was the best deal ever. They are getting desperate and are now throwing their last dice. A second referendum still has very little chance of happening. There’s no consensus for it in Parliament or anywhere else, and particularly within the Labour party. Again, it’s purely a political public vote grab by Corbyn who, if defeated, can at least say he tried.

Brexit is still boiling down to 3 outcomes.

A no-deal is still very much the threat but not the likely outcome and May’s legal and Brexit ministers are still beavering away fervently on securing the necessary changes to the backstop that could mean her deal passes.

Time remains short, and getting shorter,so the screw is turning. This will mean that headlines are likely to ramp up and so will volatility. Trading wise, we are likely to be entering the most dangerous phase of this whole saga, which has been hard to trade thus far. The outcomes from here point to a deal or an extension to get a deal and all that is GBP positive. Unless a n-deal becomes a real possibility, it’s hard to see any meaningful downside for GBP outside of the usual headline volatility, hence why I’ve been building longs since late January.

We can never say never in this story but by mid-March, we’ll either have a deal or another can kick.