Its all about small victories for EURUSD right now

The market gets full-on bearish over the Euro

If you read some of the analysis following yesterday’s ECB meeting you’d think he euro was about to head to zero. We’re in one of those situations where fear and negativity shouts louder than positive news and events. The Eurozone is facing a slowdown (well, actually things picked up a touch in the Feb PMI’s) and the analysts are going into full on apocalypse mode. We’ve got analysts cutting 12m EURUSD forecasts from 1.25 to 1.17 and calls for EURUSD to collapse over the coming days. The fear is all looking a bit much, as usual.

In this instance, I’m not in a position to wholly disagree with the sentiment, nor the fact that the Eurozone economy might soften. After all, it’s not alone. What I will disagree with is the level of negativity being touted. Let’s look at it rationally. The ECB merely changed what was already a flaky comment on rates to another flaky comment on rates. The TLTRO news is neither unexpected nor is it another monetary policy kitchen sink being thrown at the economy.  The problem the ECB has/had is not taking advantage of the earlier recovery to start normalising policy sooner. This has now put them in a tough position because they only have one main option, and that’s more stimulus. That’s a very bad position to be in because if they have to step down the QE route again (if things turn really sour), the market is not going to believe it will work, so it will have less of an effect, or perhaps zero effect. After all, if it hasn’t worked this time, where’s the evidence it will work next time?

What we’re trading here and now is pure sentiment, and not so much the fundamentals. The ECB is running scared that it overestimated the recovery. Remember all the self-back patting it gave itself last year about QE fixing everything? It’s coming back to bite them in the arse. The fundamentals aren’t showing an imminent collapse of the Eurozone economy, it’s just showing a touch of softness. But, the ECB hasn’t built itself a mon pol margin like the Fed has for those soft patches. It’s very much behind the curve, despite Draghi saying yesterday that it’s not.

However, markets are fickle and so is sentiment. If Brexit gets resolved and the US/China trade spat gets concluded, the market might find itself in a completely different place as relief and positivity flood through economies again. In an instant (in relative terms) all the dark clouds will be blown away and everyone will reverse into raising hike expectations and calling the euro higher.

That’s going to be decided by the data. If it collapses then the doom mongers will be proved right and EUR fall. If it doesn’t, then the negative vibes will ebb away. Right now, so fresh from the ECB, EURUSD is going to struggle to gain. It’s trying to climb off the mat today but the rise is very tentative and slow, and that’s not a good signal for longs (of which I’m one). If today’s rally hits any decent block of selling, we’ll be back to (and probably under) 1.12 pretty quickly. With NFP in the spotlight, sellers might be a touch hesitant to step in too hard but I suspect a poor NFP will be fodder for EURUSD sellers to hit any rally.

Right this instant, the bigger and wider tech levels are redundant. Today’s price action is purely based on the minor intraday levels. 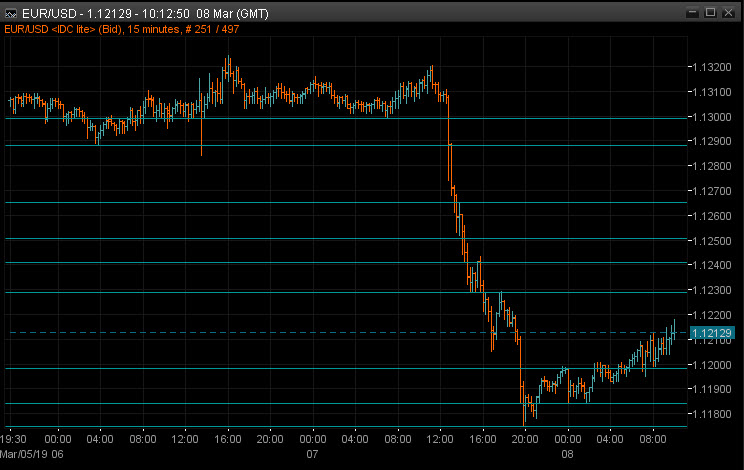 We’re not going to be testing things like the higher daily moving averages if we can’t get back over minor levels like the, Feb low or the other prior lows last time we came down here. These are all small steps the euro needs to take right now. Get back above 1.13 and the pressure is relieved immensely and the 1.12-1.15 range is confirmed once again. Fail to break even 1.1230 today and the bearish pressure remains.

As mentioned, I’m long starting from 1.1210 and I’m happy to be so, even in the face of the ECB news. I’ve been waiting for this test of 1.12 for months, and even though it went more easily than I would have liked, the break hasn’t been confirmed and so the range is still holding (for now). I (we) can only trade on what the price does so I’m not interested in any opinions on where the price might go. I don’t care if folks think it’s going to 1.05 or 1.20 today, tomorrow or next year, I’ll trade what it does, not what it might do. For now, the price is above 1.12 and I’m comfortable with that. If it breaks and I get stopped, that’s trading and I’ll move on to the next opportunity. I’m trading this no differently down here at 1.12 than I did at 1.15.

Should the NFP give me an opportunity to take some decent profit, I won’t look that gift horse in the mouth. My aim is to take some profit in the higher 1.12’s and then try and squeeze whatever I can out of the balance, while trailing my stop behind to reduce my risks.