GBP holding firm but is still on thin ice

On paper, the remaining outcomes for Brexit still leave no-deal at the bottom of the risk pile and that’s keeping the pound well supported. However, that line of thinking is seriously lacking any real supportive evidence. The vote today is on no-deal and whether it should remain an option, or should it be taken off the table. If it’s voted down (taken off the table), that’s positive for the market because it supposedly removes that risk. Unfortunately the truth is it doesn’t. A no-deal still remains a default option because if we can’t get a deal, and the worst happens and the EU deny an extension, and the UK then doesn’t revoke article 50 or vote for a 2nd ref, all that’s left is May’s deal or no-deal by 29th March.

Already, today’s no-deal vote is being seen just as a test of MP’s sentiment for a no-deal. As with a large majority of the votes and amendments we’ve had during Brexit, it won’t be legally binding on the government. They often don’t ignore the voice of the house but it still remains their option to. The vote is also becoming a muddled mess via various amendments being put forward. The Malthouse compromise could see MP’s effectively voting for a no-deal (by passing this amendment) but then voting against a no-deal after. At most it looks like a stop loss IF no-deal isn’t taken off the table. Crazy eh?

Whatever happens tonight, no-deal will remain an outcome until we get something (revoking Brexit/2nd ref) that offers another alternative to no-deal not happening. From May’s standpoint it has to remain in play or else she loses the one slim threat she has to got back to Europe and try and renegotiate. The EU may be talking tough today about how they’re ready for a no-deal but you can bet that Europe’s businesses are hopping mad with that rhetoric. No-one wants a bad deal but if there’s no threat of that from the UK side, the EU hold all the aces because they can squeeze the UK by not agreeing to an extension, unless it’s to stop Brexit (which was always one of their wishes).

As I’ve repeated often recently, an extension is also a big risk to the UK based on the EU being able to deny it, which again brings the default options back to ‘deal’, ‘no-deal’ or ‘no-Brexit’. Whatever happens, each and every vote and event will keep circling back to those same three options. Unfortunately, the clowns in Parliament still haven’t grasped that fact and continue to think that voting each one down removes it entirely. I’ll stop that part of this post there as I can feel my blood pressure rising again ?

Back to trading GBP and what it might do from here.

As ever, we need to try and put ourselves in the market’s mind to try and gauge it’s thinking. If no-deal gets taken off the table tonight (irrespective of what that really means as detailed above), there’s likely to be a knee-jerk higher. As the market is expecting that outcome, it may not be a big move. We may even see some buy the rumour, sell the fact but even then, I’m not expecting big moves. At the least, GBP should remain bid. Then we move to the extension vote, and again, if it passes, that will also be GBP supportive. But, then comes the crunch. The ball is played into the EU’s court and that’s where it might get interesting.

If they agree to an extension, expect GBP to keep a bullish tone but we will then be in can kicking mode and right back to more weeks of uncertainty and headlines. In this instance GBP will go back to a more neutral phase and back to moving with every headline and swing of Brexit. If the EU deny an extension, GBP will be hit hard.

As usual there’s a big fat caveat to all of the above. Things can change very quickly and the path we’re expecting can be altered, so just use the above as a guide for where we’re at now but with the knowledge that it can all change before the ink on this post has dried.

As for the charts, keep note of the bigger levels on the wider edges as they have been playing quite nicely as stretch points after big moves. That’s down into 1.30 and the DMA’s near there, and up into the 1.3200-1.3220/30 & 1.33 area. Don’t rely on them too much if we’re close to them when big news comes. 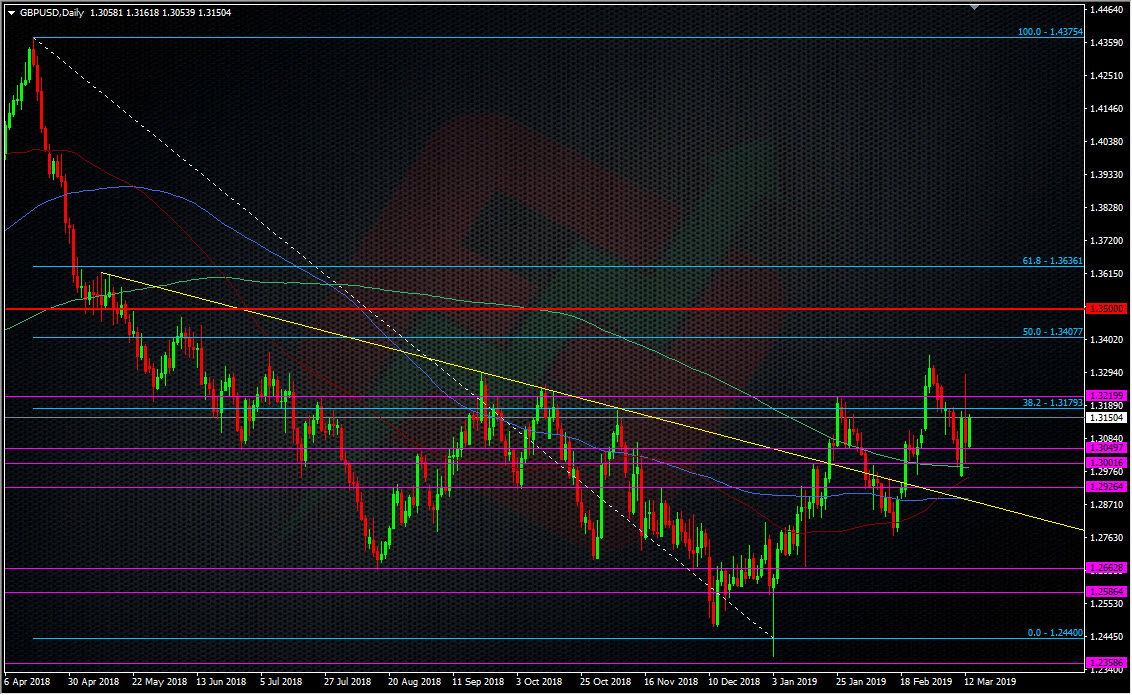 Whatever happens, remember that volatility is still high, even if things are calm right now. I’m still both long and short GBPUSD and have stops on the short well into profit, and I’ll look to lock in the profit on the longs too. For my core longs, I’ll see how the lay of the land looks after the rest of the votes but if we get to an extension outcome, I’ll consider cashing them in and then will look at how the landscape might develop over the extension period before deciding on any trading strategies. As always, those strategies will be detailed first in our live trading room on the ForexFlow platform.

Good luck if you’re going to be trading this tonight and stay safe.