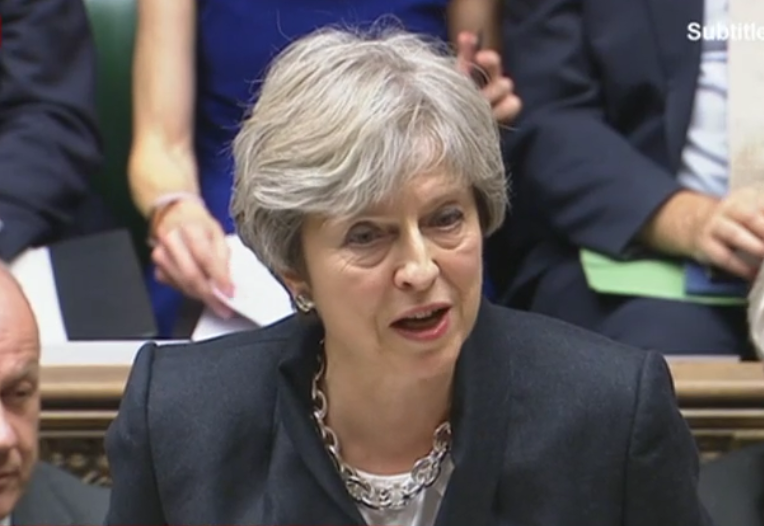 As I travel to Brussels today, I know that many people will be looking to us – the leaders of the 28 nations in the European Union – to demonstrate we are putting people first.

I want to give reassurance that this issue remains a priority, that we are united on the key principles, and that the focus over the weeks to come will be delivering an agreement that works for people here in the UK, and people in the EU.

When we started this process, some accused us of treating EU nationals as bargaining chips. Nothing could have been further from the truth. EU citizens who have made their lives in the UK have made a huge contribution to our country. And we want them and their families to stay. I couldn’t be clearer: EU citizens living lawfully in the UK today will be able to stay.

But this agreement will not only provide certainty about residence, but also healthcare, pensions and other benefits. It will mean that EU citizens who have paid into the UK system – and UK nationals into the system of an EU27 country – can benefit from what they’ve put in. It will enable families who have built their lives together in the EU and UK to stay together. And it will provide guarantees that the rights of those UK nationals currently living in the EU, and EU citizens currently living in the UK will not diverge over time.

What that leaves us with is a small number of important points to finalise. That is to be expected at this point in negotiations. We are in touching distance of agreement. I know both sides will consider each other’s proposals for finalising the agreement with an open mind And with flexibility and creativity on both sides, I am confident that we can conclude discussions on citizens’ rights in the coming weeks.

I know there is real anxiety about how the agreement will be implemented. People are concerned that the process will be complicated and bureaucratic, and will put up hurdles that are difficult to overcome. I want to provide reassurance here too.

We are developing a streamlined digital process for those applying for settled status in the UK in the future. This process will be designed with users in mind, and we will engage with them every step of the way. We will keep the cost as low as possible – no more than the cost of a UK passport. The criteria applied will be simple, transparent and strictly in accordance with the Withdrawal Agreement. People applying will not have to account for every trip they have taken in and out of the UK and will no longer have to demonstrate Comprehensive Sickness Insurance as they currently have to under EU rules. And importantly, for any EU citizen who holds Permanent Residence under the old scheme, there will be a simple process put in place to swap their current status for UK settled status.

To keep development of the system on track, the Government is also setting up a User Group that will include representatives of EU citizens in the UK, and digital, technical and legal experts. This group will meet regularly, ensuring the process is transparent and responds properly to users’ needs. And we recognise that British nationals living in the EU27 will be similarly concerned about potential changes to processes after the UK leaves the EU. We have repeatedly flagged these issues during the negotiations. And we are keen to work closely with EU Member States to ensure their processes are equally streamlined.

We want people to stay and we want families to stay together. We hugely value the contributions that EU nationals make to the economic, social and cultural fabric of the UK. And I know that Member States value equally UK nationals living in their communities. I hope that these reassurances, alongside those made by both the UK and the European Commission last week, will provide further helpful certainty to the four million people who were understandably anxious about what Brexit would mean for their futures.

It’s another chess move to put pressure on the EU to reciprocate. The removal of the sickness insurance effectively makes it easier for EU citizens to settle in the UK, though I suspect that the opposition UK parties might flag that up as an added cost burden to our already underfunded and under-resourced NHS.

This is May’s attempt to further push the EU into agreeing to moving Brexit talks to the next phase, and the inclusion of trade talks. The threat is that she has been told by four cabinet members to formally declare that the UK will walk away from negotiations if the EU don’t recognise that enough progress has been made to move to the next level.

All fun and games. The summit starts today and here’s the schedule. 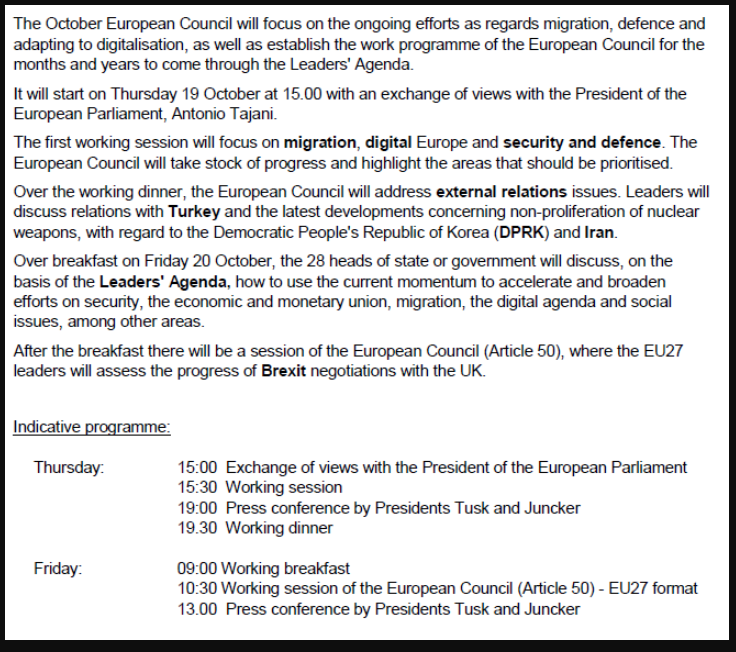 For traders, we’re going to have a lot of headline risk for the pound so make sure you’re not overextended on any positions as we could get some wild moves. I’m going to be sitting on my hands as far as the pound goes as there’s just too much unknown risk.