Happy birthday to my EURUSD longs – A year in review 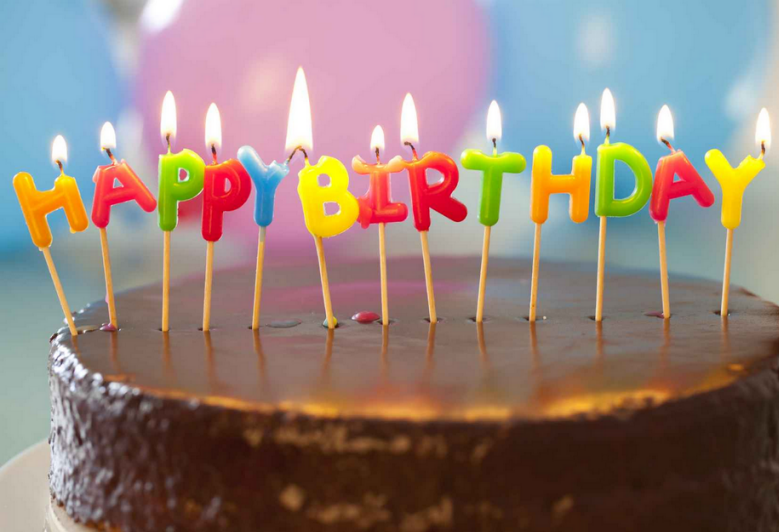 Exactly one year ago I started buying the euro on some fancy idea that Europe would see a further recovery and inflation would start rising. Here’s what I wrote at my old stomping ground 1 year ago;

These last couple of months I’ve been mainly sitting on my hands trading wise. For sometime I’ve been waiting for the right time to buy both the pound and the euro for a long-term trade. While the pound is still a work in progress, one element of the EURUSD long trade was the ECB. Now that’s passed, and gone pretty much how I was hoping, I’m starting to buy in.

My view has been that at some point the ECB won’t be able to ignore the path of the fundamentals. There’s certainly no ignoring the trend in inflation, low though it remains, the same for other data points. I’m not proclaiming boom times for Europe but what is happening is that we’re moving further away from the low levels that came from the crisis. Now we’re seeing real green shoots not more weeds. That’s what I want to trade.

The key to the trade is getting in early but only after certain conditions have been met. The ECB meeting was one, the next is the FOMC. These are/will be two big defining events and one’s that I feel could mark a significant bottom for the euro. Just as I can’t see the ECB going deeper down the QE rabbit hole, I can’t see the Fed giving us a hawkish hike. I’m going to use these two meeting to set me up as I don’t see much more downside once they’re over. Initially I’m looking for a similar reaction in USD to the hike last year but not as big. The market is always trading what’s to come and once it gets what it wants, it often takes profit then moves on to the next thing. I believe that next thing is the euro.

Why do I wait for these events?

I need the confirmation for my strategy. I need to know that I’m not just buying in willy nilly and then finding myself well offside and then having to face the added risk from these meetings. The ECB today gave me a level nearly 200 pips better to buy it at. It may still go down, and I expect it too but in my mind I’ve still made that saving and reduced my risk by a good chunk too. I’ll play the FOMC the same way.

What levels am I looking to buy at?

I took a small position at market at 1.0656 earlier(too soon as usual, that’s my impatience at work). I’m now looking down to 1.0500 and the 2016 lows. My next buy will be around 1.0550 and 1.0500, then down towards the 1.0460 lows. I’ll probably spread what I would normally buy at one of those level one their own and spread it between them. My prior wide look at the euro highlighted the area from 1.05 down to 1.03, so if that low end breaks, That’s where I’ll have my first assessment. If I’m happy for the reasons why we’re there, I’ll continue on if it heads towards parity, which will be the next big assessment point.

My first target is not to lose money. My second target is not to lose too much money before I can make some profit. Easier said than done obviously. I’m not interested in picking numbers out of the air as profit targets because I don’t trade that way. What I’ll be doing is watching how the price reacts at certain levels I’ll highlight on the way up (and conversely on the way down). My final target will be where I decide to close the last of the positions.

I don’t know where the price will be tomorrow, let alone a year’s time so the only thing to guide this trade is the fundamentals, the technicals and ultimately the PA. There’s no point in me saying I’m hoping for 1.40 when there’s a thousand technical levels in the way and need overcoming. All I’m ever concerned about is what can go wrong with the trade, not what can go right. Deal with that and the rest should take care of itself.

What could go wrong?

That’s pretty easy to define. The Eurozone economy and inflation could go backwards. The US economy could accelerate. If that happens then getting out and taking a loss is the only choice. I’m sure it won’t be as black and white as that, it never is, so navigating the grey is what I’ll have to do day by day, week by week, month by month. I’ll be watching the data and feeling the sentiment and reacting accordingly.

Whatever happens to the trade there’s one important factor to consider, and it’s something every trader should consider, and that is that I’m am prepared to lose what I am going to stake on this trade. When I trade long-term I’m prepared to risk a bit more than normal but nothing excessive. I will know what I may lose from the get go, and I will be prepared for that. There will be no shocks, no ‘deer in the headlights’ moments, no “what now?” questions if I go offside. I’ll know where I want to get in, and I’ll know where I’ll throw in the towel. I may win, I may lose, that’s trading but at all stages of the trade I’ll be in control of it, not it in control of me. If I avoid the long road to ruin, I’ll be a happy man at the end 😉

As much as ithis post might look like I’m giving myself a pat on the back, that’s not my intention. I couldn’t really give a toss whether the trade is 1 year old or 10. What I have turned this into is an exercise (and thus the reason for this post) in analysing what I did, to perhaps learn about the things I did right, and the things I did wrong. We can’t make money with hindsight but we can reflect on our actions to see where improvement might be needed. To aid that, I’ve plotted all my entries and exits on the chart. 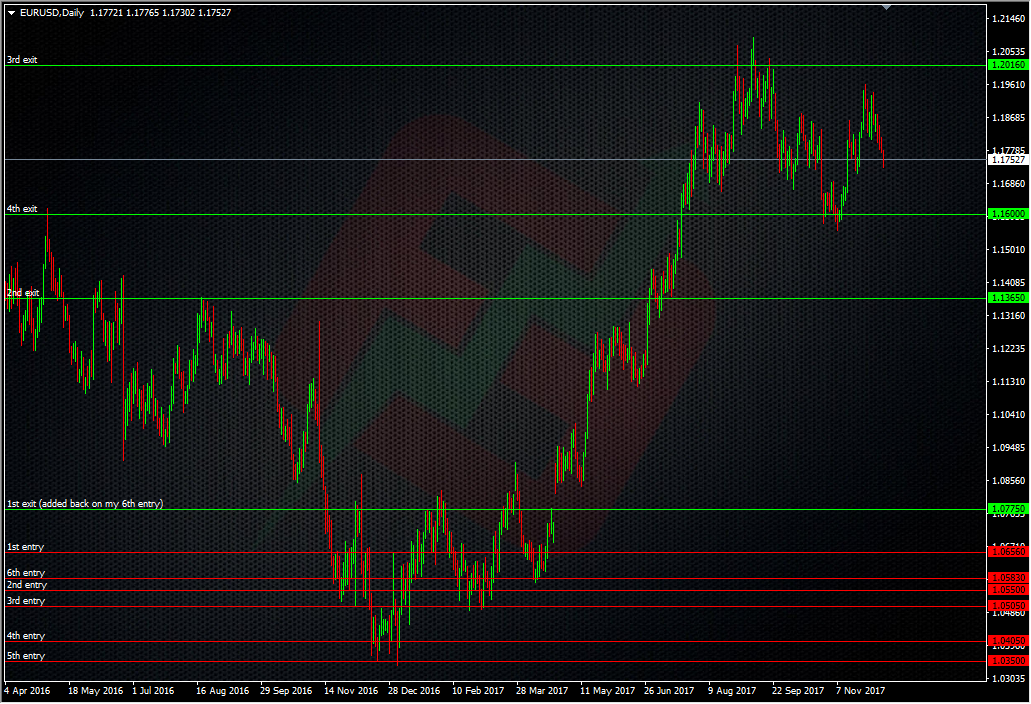 What I’ll try and do is reflect on what I was thinking at each stage.

What strikes me most when I look back is that I remember being reluctant to buy dips. I know I spoke about it, and highlighted it but I only did it the once. One reason for that was that we didn’t hit the levels I was watching but also some of the moves didn’t really offer any real dip opportunities. Again, that’s a discipline thing where I’ll only trade levels I’m happy with. We need to look at every trade like a fresh trade and define the risks accordingly.

I also didn’t buy into any breaks, which is surprising because I’m always looking for them. I think maybe the psychology from holding a position and seeing it go your way is vastly different to being out and wanting to get in. The euro move was massive and being on the outside of something like that again raises the spectre of missing out.

I’m certainly not complaining but I can see these are things to work on moving forward, to try and miximise on as many opportunities as I can.

Where are we now?

The latest ECB extension has seen the price consolidate and the 1.16-1.20 range is still firmly in place. The dollar isn’t so bullish on Fed or tax expectations so I’m happy that there’s no real risk there. If anything I’m getting the feeling that if the Fed do hike this month, that’s going to be it for quite a while unless the economy and inflation really does pick up. To that extent, I’m not overly concerened about the USD side of things. For now, I’m looking for the end of QE and perhaps signs of the first ECB hike, which I hope comes more sooner rather than later. The ECB can’s been kicked to next year but if the data starts picking up again, particularly inflation, we;re going to possibly see the same performance in 2018 as we’ve seen this year, though perhaps to a lesser extent. I’m still holding 2/6ths of my position and I’m happy to keep hold of those for the foreseable future.

Overall I’ve more of a neutral bias for FX into next year. I think monetary policy normality really hits home in the dollar and we settle to trading rate moves more normally than expecting a 500 pips move on everyone. The euro still has some legs as we’re not at the end of QE yet. I think the yen is going to be the big play next year, as K-Man has been whistling about recently. That’s for another post though 😉

For now, I’ll remind you all that it matters not where we think prices may go, it’s all about where they do go, so you won’t get price forecasts from me anytime soon.