BOC trading preview: USDCAD is a right royal mess at the moment

There’s zero expectation for any rate moves, and because there’s no presser with this one, it’s likely to be a non-event. Any moves will rest on the statement.

Poloz tends to lean with the wind rather than into it when commenting on policy and the economy. If the economy has had a couple fo soft months, the emphasis can swing to showing concern or highlighting that the BOC can move towards easing should they need to. While that doesn’t mean they will suddenly change tack, just offering such a mild view is usually enough to send the CAD on a wild ride. While we shouldn’t expect much be prepared for the possibility of some jumpy moves.

Things change quickly in markets. I had a trading plan for the BOC coming into this week but that’s been stomped on by the recent news. I was going to look for the BOC to give some mildy dovish tones in relation to the softer data of late, which would send USDCAD higher, a move I was looking to fade while the NAFTA rhetoric was looking better. That idea has now been given the kybosh by the Cohn resignation as the market is now back to fearing trade wars. There may still be a trade in that but it’s not as clear as it was a day or so ago. Perhaps then, the trade to look at is the complete opposite. Look for the BOC to offer a neutral or similar message to last time, which could be positive for the CAD in that they don’t see the recent weakness as much of an issue.I’d look to fade a drop in USDCAD with a view that the market will switch back to the NAFTA mess, which will possibly mean the CAD weakening again. There’s so much going on in this pair that it’s making things very messy and that’s not conducive to good trading.

I’ll be trading this on a reaction basis rather than getting in to anything before the announcment. Looking at the charts, the 1.30 level is still a consideration and at 70 odd pips away (at time of writing) it might be able to withstand some mild news from the BOC. A break there could potentially bring a big blow through as there are likely to be a good amount of stops just above.If I was looking to short it, it would be very tight with a possible view to reverse into a long on a break. If it does break there’s some clear sky on the technical front. The key to this 1.30 level is seeing if any break holds a retest of 1.30. If we see a pop through and stops tripped but a quick move back and under, that’s the likely signal that it’s going to be a false break. 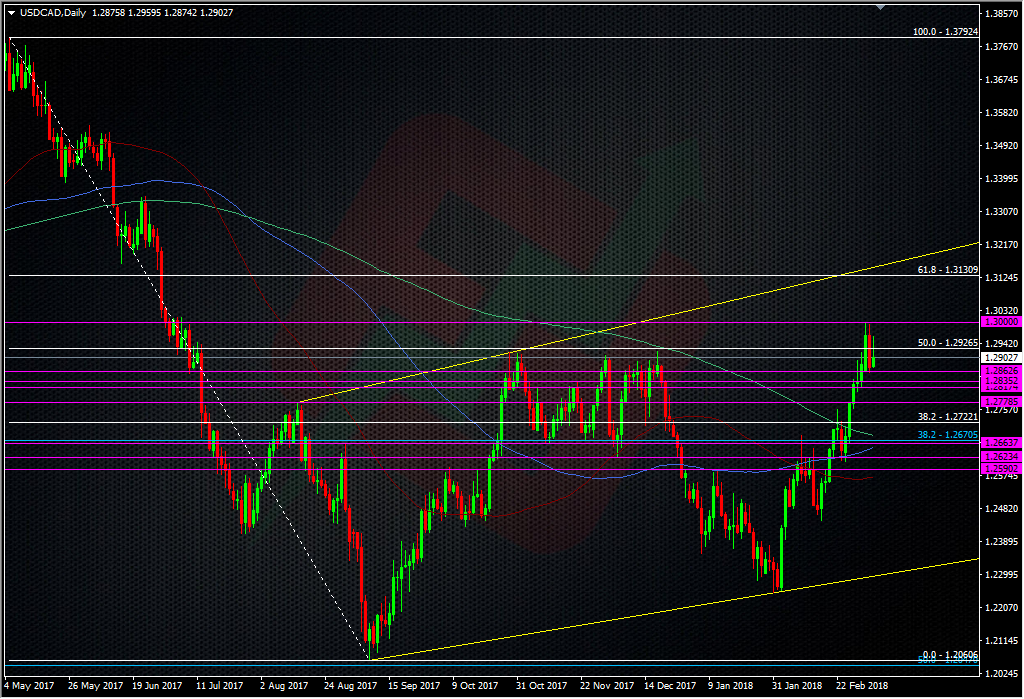 Unless there’s something standout, or I see the levels playing ball, I’ll probably sit on my hands and watch the show. Good luck to you if you’re trading it.