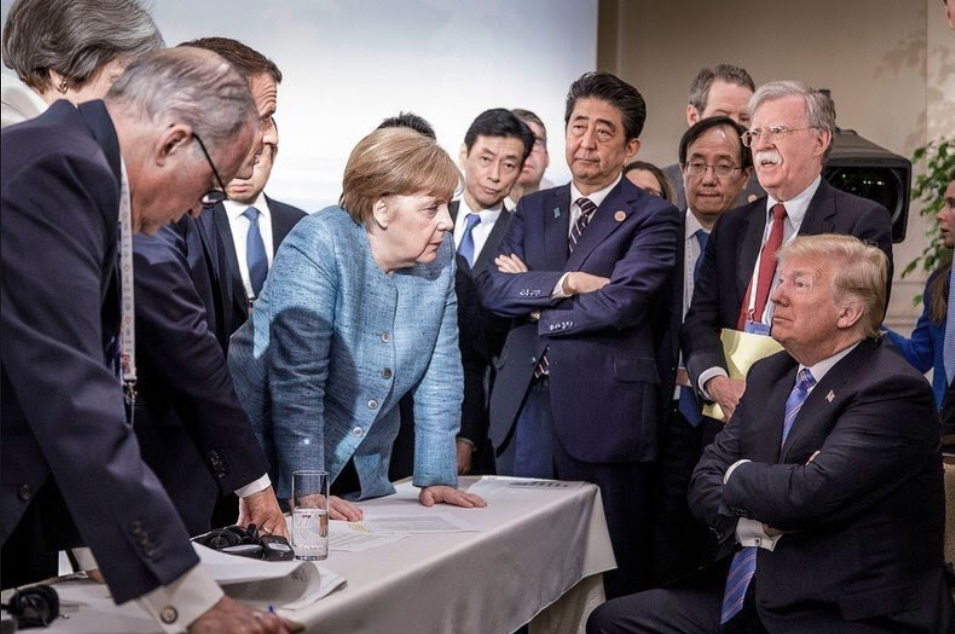 Trump’s a busy man and he’s probably glad to be gone from the G7 shambles. It seemed the main priority for six of the seven members was just getting any sort of statement out rather than working to sort out the tariff mess.

On the trade front, the most positive news to come out was Juncker offering to head over to the US to try and get to the bottom of the US’s ire, and Macron seemingly showing good willing to work on trade. That was about the only conciliatory message out of the meeting. Since then, Trump has since laid into Canada’s Trudeau calling him weak and dishonest.

PM Justin Trudeau of Canada acted so meek and mild during our @G7 meetings only to give a news conference after I left saying that, “US Tariffs were kind of insulting” and he “will not be pushed around.” Very dishonest & weak. Our Tariffs are in response to his of 270% on dairy!

Trump knows the position that Canada is in, and quite frankly he has them by the short and curlies on this issue. Trudeau’s Canada needs the US far more than the US needs them.

The true state of the G7 meeting can be summed up by the photo (at the top) that has been doing the rounds all day. Never has the saying, “if a picture could paint a thousand words” been more apt as this one snapshot of time says so much.

Trade wars pale into insignificance compared to having nukes flying around, so the G7 saga has quickly been cast aside as the next big geopolitical event takes place tomorrow. The Trump/Kim summit is likely to be very big on the headline risk and today there’s positivity oozing from markets today ahead of it.

Yen and swiss pairs are well up as are European stocks. So far today, there’s an air of expectancy that something good will come from the meeting. Be under no illusion though that this meeting has every chance of taking many a path. We could come close to a proper deal on nukes and the lifting of sanctions, or we could have another toy throwing tantrum from either side. the trading risk is high in this event so take that into account when trading.

All of the above would be enough on its own but it’s also coming in a very big week for central banks. The Fed’s Wednesday and the ECB is Thursday. The market is looking for a hike from one and news on the end of QE from the other. That’s likely to keep the euro on its toes all week.

Politics aside, look for the usual USD bullishness into a Fed meeting that may hold a policy move but remember that more often than not, we’ve bought the pre-game show then sold the after-party. The market has been a little jittery over the hike path for the year so confirmation that the Fed are resolute will comfort it but probably not to the level where it will start piling into USD once again.

The ECB is a different kettle of fish as they are running out of time to give us news on the end of QE before their proposed end date. They’ve two meetings close together (June/July) so the question will be whether they punt saying anything this week to give themselves an extra month of data before laying the groundwork near the end of July. A Fed hike and bullish comments and an ECB punt might be a minor double whammy for EURUSD. Conversely, a Fed hike might just be dip to buy if the ECB are hawkish too.

Throw in the BOJ meeting too and there’s lots that can happen this week. Once that’s all over, the market might then hit World Cup mode, which will mean periods of inactivity as traders switch from trading screens to tv screens to watch the footy. Don’t underestimate the power of the pigs bladder when it comes to trading. Liquidity and volatility can die a death around some games, and with fixtures scheduled during trading hours at 12.00, 15.00 and 18.00 GMT, there’s going to be a lot of pockets of low trading volumes. The opening match is on Thursday at 15.00, with 3 matches per day from then on.

Good luck to you this week, I hope you all have a very profitable week.