You, me and the PBOC – USDCNH trade idea

With USDCNH into 6.90, I’m starting to get ready to look at shorts

A pretty simple trade idea this one. China is set to defend 7.00 and we already know of large barriers there. The biggest central bank in the world is in play and if there’s one thing I’ve learnt over the years, it’s that if there’s one central bank that’s not afraid to show their full might, it’s the PBOC. We talk a lot about barriers and while they are just another piece of Forex information to use in your trading, it was always chatter of “Panda” in barriers or DNT’s that we would pay most attention too. Quite often they would set themselves up in a wide range and you would know that they had some size. In most cases they were in a different league to the normal stuff. A “Panda DNT” was the sort of information you would be happy to trade without a second thought because you knew that if their levels got tested, they’d give it a good slap.

So, knowing that China is officially defending the 7.00 level is not something to ignore. To that end I’m going to be watching carefully if we get up to 6.95, with a view of building shorts maybe from 6.97 up, or as close to 7.00 as I can get.

This move has been pretty parabolic, without much of a reply so there’s ample scope to see a swift retrace should China step in and/or we get some good news on the trade war front. 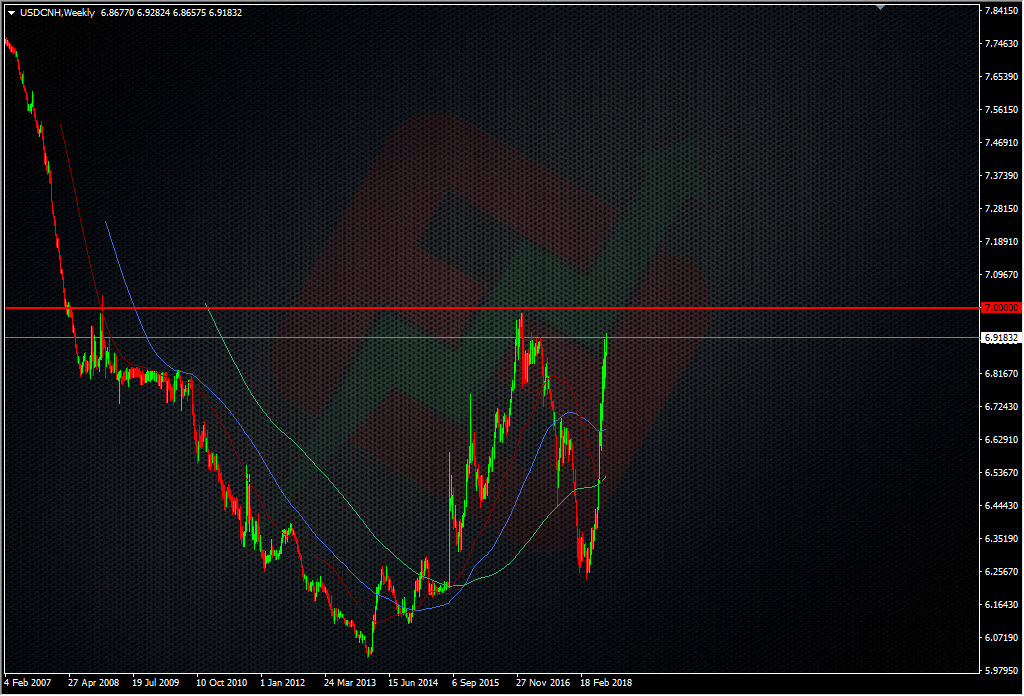 Are China/the PBOC infallible? Of course not. There’s been some discussion about this within the ForexFlow walls and one scenario is that if we see a large interest in traders wanting to trade the same plan, we could see China letting the level blow to clear out these specs before then stepping in to defend the level. Free lunches are few and far between in this business. That’s a risk to the strategy but also another way to play it, by letting 7.00 break and scaling in higher.

I’m also facing the trade war risk, which isn’t going away anytime soon. Further escalation there would reduce my confidence in the trade, because China could just bow to the market pressure and keep their powder dry for later on.

As with any trading strategy, it’s not a hit and hope play and I’ll be keeping it fairly tight if it breaks 7.00. The PBOC has given me some good trades in the past with front running the DNT’s etc and I’m happy to put my faith and money on them. That doesn’t mean trading recklessly or with a lack of discipline though.