What did we learn this week? Trump and Xi sitting in a tree K.I.S.S…

If Disney World needed any inspiration for a new attraction, they should build a rollercoaster based on some of this week’s FX or equity index charts.

The week started with further thoughts about the month end. USD continued its climb as the models all lined up for USD buying. Both the pound and the euro were the lame ducks once again but some good levels showed their hands once more. EURUSD bottomed at the 1.1300 barrier. GBPUSD finished being crushed from negative Brexit at 1.2700. Both bounced but for several reasons.

Here’s how we closed. 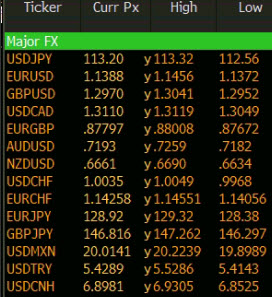 Once again, the Brexit news bombs we’re delivered. This time by the Royal Air force. We went from Brexit radio silence since the summit, to suddenly being flooded with headlines all saying that (once again) the UK was heading towards a deal. There were letters from Brexit minister Raab flying about, deals over financial services and the Irish border. It was as if the summit week prior was just out imagination. GBP buyers duly took the recent shorts to the woodshed and plenty of screaming was heard. Even denials about the financial services deal being done and dusted, from both sides of the channel, failed to stop the buyers from chasing shorts back up the road. We haven’t quite gone all the way back but a near 350 pip bounce in 3 days after a 500 pip crushing is fine work indeed.

The BOE came out with a hawkish statement at the MPC meeting, which brought a mild reaction in GBP but then the Carney show was a complete dud with the UK press deciding to badger Carney about Brexit for pretty much the whole presser. These folks can come up with headlines that move markets yet put them live in front of a someone with real market moving potential and they flap around repeating each other’s crappy questions.

How are we left? The market is sensing a Brexit deal once more and until someone comes out and shoots it all down again, we’re going to stay bid.

EURUSD seemed to find itself being dragged up with the others, rather than leading for any fundamental reasons. Data was very shoddy again this week bringing no further respite for the ECB. GDP sucked, some retail sales sucked and manufacturing sucked. The only consolation was inflation not sucking. Some late news that the ECB might be considering a fresh round of TLTRO’s shook the euro under 1.1400 but it shouldn’t be a surprise to start hearing such noises, given the softening of the economy, temporary or otherwise. The ECB tool box is still within easy reach under the kitchen sink.

And that brings us to the other main catalyst of the week.

Trump and Xi are love birds once again. Gone are the threats of tariffs and China not playing ball. Trump and his minions came out in force to peddle a G20 meeting between the two. Talk of a new deal being written up by Trump spread far and wide. Risk blossomed likes the buds of spring, aiding the moves of cable and EURUSD higher. Those incessant prodders of the 7 level in USDCNH suddenly found a very small exit door for their long trades, and more than a few of us in the trading room, who had been shorting all the way up, shared a few virtual high-fives as the price moved under 6.90 from 6.98. That move continued today with more Trump/Xi bluster and 6.85 was the low before someone started smelling a rat and started poking around. Afternoon news supposedly from “Senior sources” said that a deal was not being written up, only that talks were ongoing. Then we were in a headline battle between Trump and his stooges pumping the Xi meeting up, and certain news agencies calling them out. The market got a little bit of the hump and knocked back some of the earlier risk exposure. The natural conclusion was this positive news campaign from Trump had more than one eye on stopping further falls in US stocks, with the mid-terms right around the corner. All that helped the USD take on a bid long after the NFP had passed, and that in itself went smoothly. There’s a big week for US politics next week and markets are going to be zeroed in on that.

Trading wise, there’s been some fantastic manoeuvring by my colleagues and roomies. Dubsy has been spanking Dow shorts out the park, while Kman has been picking trades like juicy fruits off a tree. There’s been plenty for everyone, and long may it continue. For myself, I had a bit of a mixed week on the short-term stuff. I was a bit out of sorts early in the week and needed to gather my thoughts.

That’s another huge positive of trading in a very good community as we can open up and talk things out and that’s exactly what I did. Chatting things over with others offered me some clarity and realisation of what I was doing wrong and how I should have been approaching some trades. That helped me grab pretty much the bottom in EURUSD, which I’m still holding some of after TP’ing bits on the way up. I’ve had a result with the USDCNH shorts in my slow cooker and I tp’d half pretty much near the lows of the day. I spoilt some of the fun by not sticking to my strategy of taking quick pips and running the rest today with post-NFP trades of short USDJPY and long AUDUSD. I had an opportunity of grabbing 15/20- pips on both but decided to be greedy and it cost me by both getting stopped out.

So, on that front, I thank the guys and girls in my trading room for listening and offering me advice. It’s humbling and heart-warming to know that we’re all looking after each other. The same goes for those of you who grace our doors in the comments and social media and provide equally important views, ideas and advice, so a big thanks to you as well. I may have been in this game a long time but I still have the odd wobble and wonkiness we all get. Our door is always open here at ForexFlow, should you need help too.

All that’s left is to wish you a wonderful weekend, and thank you for coming to ForexFlow. Don’t forget that US clocks change this weekend.

This one goes out to The Don.