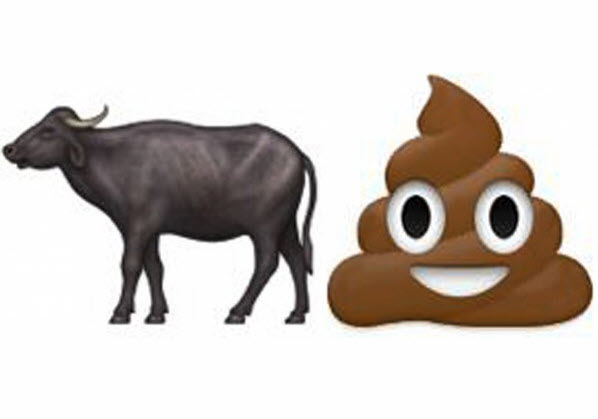 So, how about that yield curve eh? Gone all inverted eh? Must be a recession coming eh? What a load of old bollocks.

Let me give you a fact that is a million times more accurate and truer than what the poxy yield curve might show.

A recession always follows a period of expansion.

The yield curve itself is nothing more than a sentiment indicator, the same as the VIX, or Central bank interest rate probabilities, or currency moves generally, or volatility indicators, or any other number of markets and assets. 99.99999% of the whole world of trading revolves around sentiment and expectation of what might happen. Economies are cyclical. They go up, they go down. Sometimes they go up a lot, sometimes they go down a lot. Now and then Mr Poo visits Mr Fan and it all goes pear shaped.

So, the world and his mate pissing themselves over what the bond market might reflect is no more a look into the future than checking the tea leaves. The only thing that will bring a recession is a drop in economic activity, and guess what, we’ve been seeing that for months in various economies and indicators, funnily enough, right after a period of expansion ?. So, what exactly is the yield curve telling us that we haven’t already seen with our own eyes? Sweet FA.

For quite a while, the doom mongers have been locked in the garden shed while countries recovered from the crisis. Now they’re coming out the woodwork. Stock perma-bears that have been wrong for the last 11 years are now thinking “this is the moment we’re right”. There are people shouting that rate cuts are coming and QE is going to follow. Well, you know what, that’s what bloody well happens in periods of normality! Central banks cut and raise rates to nurse economies along. The way some are talking, you’d think they’ve only stepped into economics last week. Hello?!? This stuff happens in cycles. For many of us this isn’t our first rodeo. As for QE, forget it. Unless there’s some major crisis, central banks won’t be starting QE again just because inflation or GDP drops a couple of ticks.

The simple reason why yields are inverting is simply down to margins. Because we’re in a period of low rates, the curve is naturally flatter. Therefore, bond yields don’t have to move as much to affect the curve. And what will move the curve? The economic data and what the central banks say.

If the yield curve talk is all bollocks should we ignore it?

Yes, we ignore it from the point of view that it doesn’t make a single shred of difference to how we trade. It doesn’t affect how we plot levels on our charts, how we execute trades or how we manage trades. We certainly don’t get sucked into the hype and start throwing money on flaky recession calls.

No, we don’t ignore it from how it’s affecting markets. In fact, as much as I disagree with all the crap talk flying around, I’m rather glad of it because the talk can bring us volatility. It can start trends we can trade rather than sitting in this low vol malaise. It gives us the opportunity to counter fear and sentiment, if we understand reality from fantasy.

The US, the EU, the UK may all go into recession. It may happen tomorrow, it may happen in 5 years. What will guide us will be the data. The US is a million miles away from recession, and even further from more QE. At most, the Fed will long out the BS roll off and maybe cut rates if inflation and the economy drops back but even then, that will be dependent on why that’s happened. Maybe they’ll trot out some economic boosting measures like TLTRO’s. One thing I will say about QE and that is a lot of people think incorrectly about it and its possible future effects. If any central bank has to restart QE within the next 5 years (barring some sort of new crisis), that will not be a positive or encouraging move. It will call into question whether QE actually works at all because if chucking trillions at your economy can’t buy you a few years of stability, nothing can. Restarting QE will an admittance that it doesn’t work and a sign central banks are desperate. In the market’s eyes, that will be a very bad thing, not a good thing.

The yield curve can invert itself up its own backside for all I care. What I do care about is finding the opportunities to trade with the sentiment it brings, or against it. If the dollar falls out of bed on bad sentiment and I still see US GDP running at 2.6%, I’ll be a happy buyer. If I see the data trending down, I’ll be a seller. From a trading perspective, I don’t care which way economies or central banks go, all I care about is being able to trade it. A case in point has maybe just been made from today’s MBA mortgage data; 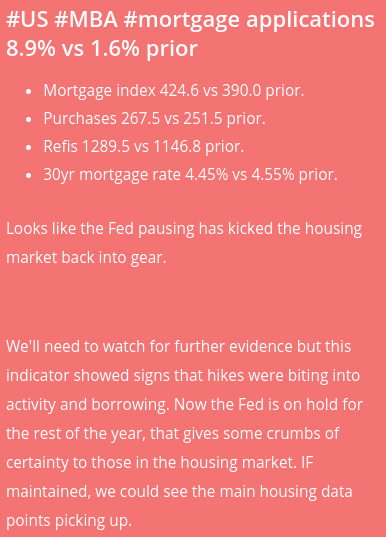 This data may signal a pick up in the housing market purely due to the Fed going on hold. If that happens, that’s a positive for the economy and means a greater chance of rates rising. It flies in the face of sentiment calling for rate cuts/QE because of what the blooming yield curve might be doing. If disparities like this are clear and real, that’s a trading opportunity.

That’s the main point of this post. Don’t let yourself get sucked into the market talk and let it affect your trading. It’s our job to stay objective to any situation and not let personal feelings affect how we trade. For example, I still maintain that a Brexit deal is still likely to happen but that won’t stop me selling GBP if there’s a reason that brings an opportunity to do so. What I want personally for the country I live in does not factor into my trading reasoning but it’s very easy for some of you traders to be sucked in to thinking the world is going to end so you feel the need to sell the shit out of everything. If you think you’re succumbing to the ‘talk’ or ‘fear’, take a step back, look at the situation objectively, and get your mind right about what’s going on.

I know one thing for certain, we’ll be plotting and scheming to trade all this in our live trading room and I expect plenty of pips to be made.