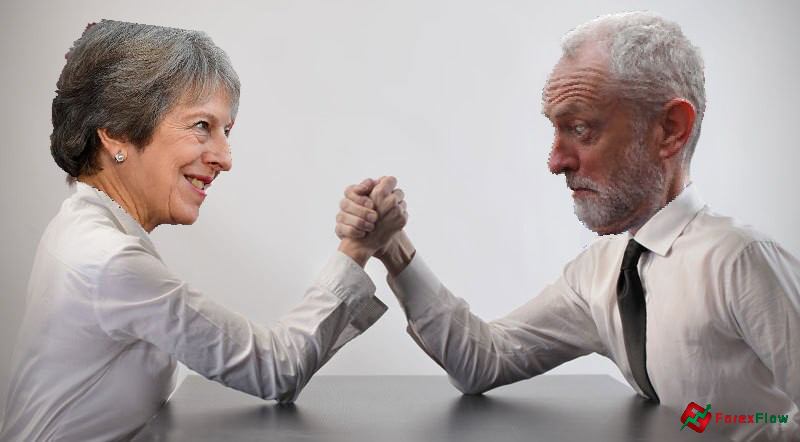 The first May/Corbyn meeting didn’t end with anything positive. The meeting was officially classed as “Constructive” (keyword for absolutely nothing was decided), then later it was said the talks hadn’t gone well at all. They do it all again today apparently and this time there’s either going to be progress or it will end in another stalemate.

It’s all going to come down to who folds first. This is politics so by proxy, neither side can agree with the other, even if one or the other has the best Brexit deal ideas ever thought of. Corbyn can’t give in to May, May can’t give in to Corbyn. The only way some form of consensus can be found is if they can find a way to give in to each other without making it seem that way. So, if May wants to give in to Corbyn’s customs demands, it’s going to have to be called something else, something with a name that makes it sound new that can be put forward as a new idea, even though it will be exactly what it is. The same goes for Corbyn. It’s still going to take one or the other to fold first before they can even start to agree on anything. That is the only way we’ll get something cohesive out of this but even then, there’s still a high chance they won’t agree on anything. For all her faults and errors (of which there are many) May does still seem to be the only person who is putting Brexit ahead of party politics. However, Corbyn is only interested in how these meetings with May can get his party into power, and this is a huge opportunity, here’s why.

Look at how this will go down. May is stepping outside of her party to engage the opposition. She’s managing to piss off both leavers and remainers in her own party. They are spitting feathers at this move. From the other side, if Corbyn and May do find a consensus, Corbyn is going to shout from the roof tops that it took Labour to finally open the door to a Brexit deal. He’s going to paint himself a hero and the people will lap it up. He may not do that straight away but when the ink is dry on the agreement with the EU, and we’ve finally left, Corbyn will then be crowing about how he saved Brexit. May is definitely risking more than she’ll ever gain but she’s doing it to get Brexit done.

What’s likely to be agreed?

I think we’re going to get another form of can kick. Remember, the Brexit deal is in two parts, the Withdrawal Agreement and the Political Declaration. The EU wants the WA passed before giving the 22 May extension so whatever May offers Corbyn, or whatever Corbyn wants, May will make it conditional on Corbyn backing the WA. The rest is likely to be a list of agreed proposals to be taken to the EU to be added to the Political Declaration (and that might be another lengthy saga on its own as all that will probably have to go through Parliament).

Whatever happens, there is not going to be a point where we can finally close the door on Brexit, even if May and Corbyn find a compromise. They will still have to satisfy their own parties, and that’s going to be a huge problem by itself. May and Corbyn finding a consensus will be good news but trying to get over 200 MP’s (each) in their own party to find the same consensus is going to be very hard. The Times’s Sam Coates said it best yesterday; 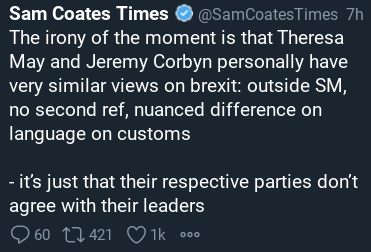 Any positive outcome from the May/Corbyn meeting could be shot down in flames by the leave/remain factions. And, everyone has seemed to have forgotten the DUP in all this. May can get a deal passed if she has Labour backing, making the DUP’s votes irrelevant but she still has to factor them in for whatever happens to the backstop/border issue, and there’s been some very dark paths spoken about in that situation, like chatter of a return to direct rule in Northern Ireland. It may be scaremongering talk but there is a huge can of worms to be opened if she excludes the DUP.

And what of the Letwin/Cooper bill that managed to be rushed through Parliament? This was a bill to give May a legal obligation to seek an extension and avoid no-deal. This is now one step from becoming law (will now go to the House of Lords). This is an amendment that we’ve seen voted for before but it’s actually going to come into law, rather than be something just seen as the will of the House. Many commentators have been wondering why this hasn’t been more positive for GBP, after all, it’s avoiding no deal and pushing for an extension? It’s pretty simple really. Firstly, May has already said she would seek an extension, and secondly, the UK can pass whatever laws it likes about extensions and no-deals, that law stops dead at Dover and an extension is solely up to the EU. If they don’t agree to an extension, this new law is pretty much toothless and redundant.

How will all this affect the pound?

Let’s get to the main reason for all this.

A May/Corbyn deal will be very positive for GBP but we’ll need to see the details, so expect any news of such an agreement to give GBP a knee-jerk shove higher. Then, we’ll need to see the details and how any agreement is going to be seen at the party level. If there’s enough support against it, it could get torpedoed quickly and we’ll be back to square one, and GBP will fall.

If the parties support the May/Corbyn agreement, then we’re flying because we’re potentially, finally, heading for a deal but then we have to bring the DUP into the equation.

However, there are still huge risks involved, first and foremost is that May and Corbyn don’t agree on anything (back to square one). In that case, May could be forced by the Letwin/Copper bill to seek an extension from the EU, which will likely fail if the WA hasn’t been passed, or if she’s taking nothing to the EU to give them reason to grant an extension. In that instance, for all the laws and amendments seeking otherwise, the default position is the UK will be leaving the EU with no deal, because all avenues to avoid that have been exhausted.

I personally think that the market is overreacting to all this news. It’s buoyed up on the May/Corbyn thing, it’s buoyed up on the Letwin/Copper thing, and I actually think that this is potentially one of the most dangerous times for Brexit we’ve faced, simply because we only have 8 days to go and we can’t keep going around in circles. We’ve already had failed May/Corbyn meetings, we’ve already had failed WA votes, we’ve already had Corbyn’s Brexit plans knocked back and the leave/remain in-party fighting will not abate. The chances of any or all of that changing are very low and the market isn’t factoring that in. That means we traders have to or else we’re going to do damage to our accounts.

For the sake of good order, I’m currently short GBPUSD on very small clips from 1.3105 to 1.3145. I was also short at 1.3195 but cut that in yesterday’s pre-services PMI dip. Right now, I’m happy to add again up there (depending on the news). In one sense, I’ll be happy to lose on this trade if the reason is that a Brexit deal is done (because it’s all driving me up the wall). As usual, our traders are all planning for the next Brexit moves in the ForexFlow live trading room.

Nothing in any part of Brexit so far has been a straight road to an outcome, and we should expect exactly the same from this stage of things. Be careful with the headlines and make sure you know what they really mean as opposed to what the market thinks they might mean. As best we can, we’ll have that all covered for you hear at ForexFlow.