USDCNH is back on the trading radar

An increase in US and China trade tensions are edging USDCNH back towards the big 7.00 level

In the latter part of 2018, some of us in the live trading room profited from playing shorts in USDCNH into the 7.00 level. We’re heading that way again and so I’m looking at a similar plan to back then. We’re not too far off the 6.90 level and if that breaks, I’m going to start planning to scale in some shorts.

Will this be a complete ‘rinse and repeat’ trade?

Absolutely not. Just because a trade worked previously doesn’t mean it will work that way again. As with every trade, it needs to be judged on its merits at the time to analyse what has changed.

In the case of this trade, what’s changed is that we’re further down the road on trade talks. We’re also in a different place where the US and China are coming to loggerheads, rather than looking like a deal is possible. The US is pushing for more tariffs and China has said they’ll respond. The trade deal is actually at risk at this point in time and that’s a big negative force for this strategy.

One of the big risks for USDCNH is that China has played nicely with their currency since the trade talks have been progressing but that might all change. A weakening yuan was one of the US’s big gripes and so the Chinese have kept it in check. The 7 level became a big line in the sand and one I was happy to side with the Chinese on (as they were in officially protecting the level). The big risk this time is that if these trade deal talks do blow up (more so than they are currently), China would then feel less obliged to hinder the yuan weakening further. It could even become an official natural double response to US tariffs in that it would piss the US off on the currency argument front but also negate the financial impact of tariffs by making US imports from China cheaper.

Secondly, I’ll be looking for fresh confirmation that the barriers and official defense of the 7.00 level are still in place. They were a big reason to lean against last time but I’ll still want the reassurance that they’re still there.

The news leading up to any move into 6.90 will be very important. If this week’s US/China trade meeting goes wonky, I’ll be less enthusiastic about the trade. If we perhaps get some conciliatory tones, even if it means they’re going to take a break from negotiations and come back to them later, I’ll be more enthused with the trade. So, a more cautious approach is needed this time. There’s various good looking levels on the chart to watch but my main focus will be on the 6.90-7.00 area. 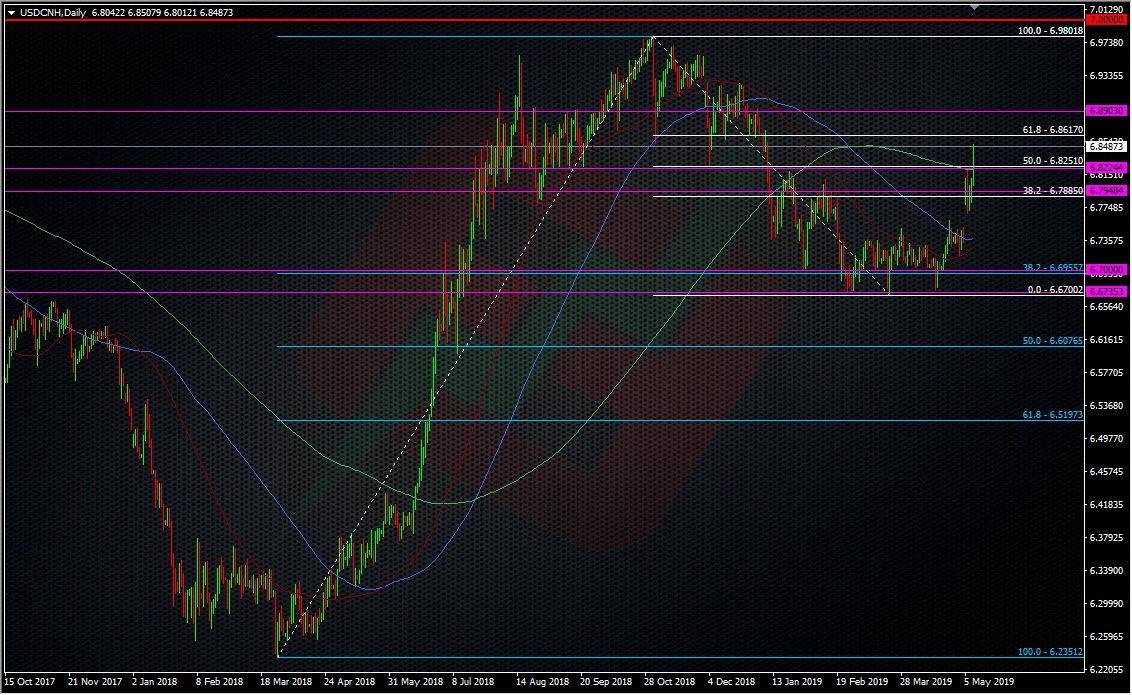 As per last time, I’ll be looking at the 6.95 area to start scaling shorts up to 7.00. Once again, I’ll keep a stop fairly tight above the 7 level and I’ll define that stop as (if) and when we get up there, as I’ll need to assess the situation and the reasons why the price has gone there.

It’s absolutely fine to repeat a prior trade plan but we must not be blinkered to any new facts that surround it. The world and markets are constantly changing and so every trade must be viewed objectively and with fresh eyes. In one sense, the fact that it might be a repeat strategy needs to be ignored, so treat it as a fresh trade.

As usual, I’ll keep posting updates as we go and we’ll see what happens.