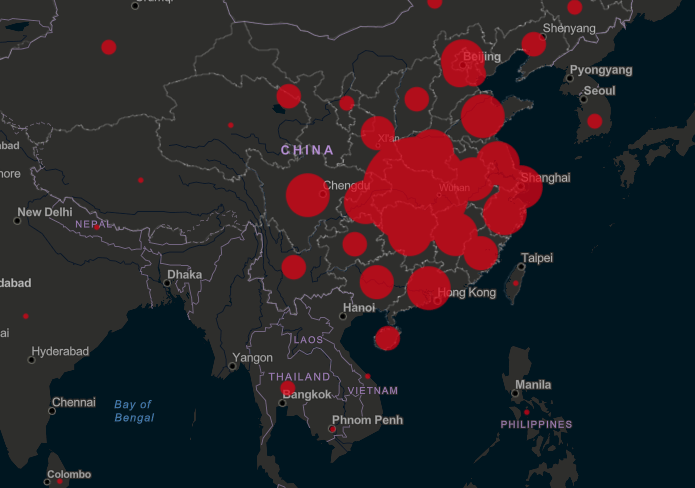 Firstly, let’s remember the human implications of this. People are dying and all though (thankfully) the numbers still seem small compared to those infected, one death is too many. When trading market moves led by virus headlines, try and spare a thought for the human cost.

The obvious one. Growth will take a hit in China but the pathways from that are many and far reaching. From a market perspective there’s going to be nothing unexpected about seeing lower growth from China or anywhere else that’s reliant on China, which is pretty much everywhere. The simple maths is that the longer and wider spread this becomes, the worse it’s going to get.

The broad range of possible effects will go on and on. Tourism is one as people won’t travel the wider the virus spreads. That hits domestically and internationally. It transfers into transport, fuel (see OPEC), and services. Then cargo movements begin to slowdown, (again, fuel is in the frame). Production grinds to a halt, which hits manufacturing firms like car companies.  Some firms with operations in China (Autos) have told workers to work from home or have asked them to take unpaid leave (airlines). How do you put a car together from your house or pay the bills when there’s no wage? And, we haven’t even touched on food and commodities (see OPEC). It’s a widespread web, make no mistake.

Supply chains are where the hits are going to be felt first. If goods aren’t moving and orders are not being fulfilled, firms have to look elsewhere. That potentially means additional costs (more on that in a moment). However, moving to other suppliers can help counter economic weakness from halted business from China. If someone in the UK buys regularly from China but now has to get those goods from the US or elsewhere, that’s a bonus to the selling countries and they pick up the business. It maybe even helps the domestic market if those goods or porducts can be sourced at home. But, that leads to one of the issues no one is really talking about. Here at ForexFlow we suspect we’re seeing signs of that switches of supply. The US is looking very bid and so we need to watch the manufacturing surveys to see if they’re picking up additional business. The US is pretty much in the right place to benefit.

Although there’s many arguments to say China has lost its “cheap in China” advantage, it really hasn’t, so any move away from buying from China is likely to increase costs. There’s the simple supply and demand issue first and foremost. If one huge area of supply is shutdown, that lowers supply and thus raises prices. There’s a limit to how much firms will wear of any increased costs but if it’s wholesale, it will be passed on up the chain. All of a sudden we’ve got some fast inflation bearing down on us.

Again, the inflation factor is one of time and how long this goes on for before things start getting back to normal.

This might be a bit more complex to work out. Markets react to shock so if US growth is expected at +2.5%, and comes in -1.5%, that’s a shock. In theory, there shouldn’t be any shocks if Chinese growth drops, or indeed growth of heavilly China-reliant countries or firms. It’s not going to be good for stocks if there’s bad news but it won’t be unexpected and so the market effect is likely to be muted. I’m not saying there won’t be any big volatility but there won’t be many surprises.

But, what about central banks I hear you ask? They’re all watching for the economic impact. In truth, they’re pretty powerless in situations like this. They can no more use rates to stop an inflation blast than stop the tides of the sea, even if that inflation feeds through to core prices. UK inflation vs oil prices are one example to look at to get what I’m saying. Imported inflation cannot be combated by central banks. So, that puts CB’s in a sticky spot. If they see economic weakness coming in via a slump in global growth, they’ll want to ease but they’ll also be seeing inflation rising, so they’ll want to tighen. Rock and a hard place? Interest rates don’t stop things like viruses. They don’t get people back to work, they don’t get production lines moving. The PBOC have the easing injections out but still China’s shutdowns are increasing. Easing means nothing if it has no way of being used. The same can be said of the OPEC headless chickens right now, who are running around talking about bigger supply cuts. It’s rubbish. They should turn some taps off if demand has fallen but they’re in cloud cuckoo land if they think it’s going to support their prices meaningfully.

Much like a virus, there’s often many phases in the life of markets. We’ve had the panic in our markets, then China had the panic in theirs when they reopened. Now everyone is over that, all eyes are on how far this thing spreads and whether it becomes more dangerous or not. We’re still very much in safety mode so the havens will find business on bad headlines, and give back on good but soon we’re perhaps going to start seeing where the economic impacts are really going to coming from. That’s where the real FX moves will happen. IF the US is going become the China substitute, that’s going to see big USD flows, as long as any negatives don’t outweigh those. That’s the sort of near-term impact to look for and trade. Longer-term, if China suffers now but comes through this, then their economy will pick up, maybe at the cost of the US, so later on we see some softness creeping back in. Look for countries that may buck the trend of the growth worries. What we’re looking for is where the tides of money will flow from and too, and then when the may flow back again. In the bigger picture, that’s all markets ever do, just with events like this, things become more acute.

This virus episode could be the next big global event. We’re 13 odd years from when the shit hit the fan with the GFC so that’s about the right length of time for something else to come into play. These things always tend to be unexpected and catches everyone off guard. One minute we’re starting 2020 with some hope, the next we’re all wondering if we’re all going to be wiped of the face of the earth. Be in no doubt that despite maybe sounding a little blasé above about the possible effects, there is still a real risk that things turn very wonky. The spread of this is still very much in the early stages and already there’s big fears of it spreading to lesser-health able areas like Africa. As mentioned, a virus knows no monetary bounds. It doesn’t get stopped by monetary policy. QE can’t fix this. If people are sick they can’t work. If goods don’t move things grind to a halt and no amount of mon pol will get it moving again. It may help in the aftermath and with a recovery but in the middle of it, it will do nothing.

When all is said and done, FX markets are still pretty much in their longer-term ranges and so that’s our big-picture focus for now. If we stay in those, this situation remains fairly calm. If we’re driven to break those ranges, then we’re into something different. Like most things, it matters not if you don’t understand what’s going on in the world, the charts don’t either. Either a line holds or it breaks and it’s what you do with that that matters.

So it’s been a while since I wrote this post and thought it worthy of an update. Things have pretty much started to play out as expected regarding the virus and possible reactions. What’s becoming clearer is the possible global impact. We’ve seen supply and demand take a hit and that’s leading to a lot of raised expectations for rate cuts. Given some of the moves we’ve been seeing in bond yields, the metrics used to plot rate expectations may be giving a false signal on central bank rates. Yields are tumbling, which plays into the interest rate world. The main reason for this isn’t CB expectations, it’s safe haven moves as money floods into the safety of bonds, with the US top of the list. This likely means that the rate expectation metrics are developing as a consequence of these moves, rather than CB cuts being a primary reason.

Secondly, while global growth is being set up to take a big hit, we at ForexFlow don’t believe that is where the biggest risk now lies. The big global risk developing is going to be financial stability from something as simple as cash flow. If business output slows down or stops suddenly, that’s going to put a huge strain on company finances. Given the nature of the virus and the way it’s causing shutdowns in towns and cities, this is not a gradual thing that firms can adjust to. One day a shop may be open, the next it’s shut for a month or more. That means no money coming in the front door but still bills to be paid out the back door.That simple cash flow conundrum is where the problems are going to come from because under no circumstance can a CB rate cut fix that.

While we feel that CB cuts is a very likely outcome, it won’t be the right one unless there’s addition financing or fiscal measures put in place by CB’s/Governments to ease those financial burdens. Only targeted measures will help business in this situation. 25bp rate cuts and more QE won’t. Firms will need leeway on their bills or be able to access very cheap, or interest free loans to cover any shutdowns or drop in business. China is already doing it as today they announced funding support to key industries. In effect, monetary transmission from accommodative CB’s needs to really be fine tuned and sent down the line and be more than just cheap money for big banks to play with. Make no mistake, it would be a huge job as the whole chain from top to bottom may need financing relief.

How would all this affect markets?

The short answer is that the market will take any easing measures the same way it does already, so whether it’s rate cuts or targeted financing, the outcome is still going to be viewed the same way, that cheap cash is being thrown at the problem. The big risk though is if they don’t use any targeted measures. Because we don’t believe simple rate cuts and increased QE will do the job, only doing that increases the longer-term ramifications for economies. That would lead to CB’s really being in trouble as they’d be forced further down the rabbit hole. Rates are already low, QE is already sloshing around the system and there’s a risk every major CB turns into the BOJ. If that happens, it’s not going to be good.

There’s a long way to go yet and the current fear we’re seeing now as other countries get the virus may fade. The problem is how bad the economic impact becomes, and what governments and central banks do about it.