The ForexFlow US election trading guide 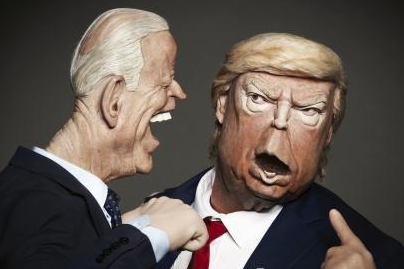 Blue waves, red waves, hair waves, we’ve got you covered over the US election by doing what we do best, keeping things simple

If you’re feeling seasick from hearing about different coloured waves then fear not, we’re nearly at the conclusion of the US election (or perhaps not, if it’s contested).

I’m not going to add to your woes by setting out 50 different possible trading outcomes based on 100 different possible election outcomes. My aim as a trader is to assess risk, and all I see is lots of risk and lots of possible volatility. That makes me want to reduce my trading risk and wait to see how the land lies after, not gamble on trying to pick what might happen before.

All that said and done, we need to look at a rough plan of what might happen and what trades might present themselves after, so here’s a few pointers I’ll be following;

This is the most important aspect. Before we get to new policies and the ever-watched-for spending, the market wants to see that there’s political stability. In this case it wants a clean win for either side. Unfortunately, this is a big risk with Trump saying he’ll contest the result if he feels there’s been some shenanigans. If that happens, that’s going to be a negative for all things US. It pretty much puts the US in limbo on everything for however long it takles to sort out. In such a case I’d expect flows out of US assets, at least on a short-term basis.

Once we know who’s won, and who owns what House, we can then look for any possible trades on policy (is there big spending coming, where it’s going to be spent etc etc). This is yet another risk point that potentially gets thrown into disarray if there’s gridlock in the two Houses, just like there is now.

The big main policy(ies) is further stimulus packages. They’ll keep coming after this one (number 2) gets sorted (if it ever does). But, therein lies further risks. Forward looking traders will be looking for things like big infrastructure spending, which can be played in assets like commodities. This is seen as a boost to the economy. The problem right now though is the dreaded virus. These first two stimulus packages have been virus hole plugging packages. The issue I see here is whether any further packages become more hole plugging or proper economic boosting packages, and that’s going to be very important. If stimulus packages 3, 4, 5… are still just supporting jobs and virus related issues like lockdowns, then this is just fire fighting money, not economic boosting money. That’s not good for thinking about longer-term trades (think inflation, growth and thus the Fed) as that will push back proper infrastructure spending, maybe by years. Unfortunately, this is all a ‘wait and see’ process for us.

3. Too many pots on the stove

There’s a lot of people looking for big moves on this election outcome but as we all know by now, nothing about 2020 is normal. We can’t get over the election and a week after be sitting with our feet up. We have huge events still going on in the world, from the virus, to Brexit, to China, and everything else. 2020 has been about jumping out of one fire and into another with barely time to catch our breaths in between. I’m sceptical about seeing any big lasting or trending moves from the election. I’m expecting plenty of volatility but depending on how things stand (clear winner or contested), it won’t be long before we switch from the election back to everything else going on. Just this week alone we have the BOE, the FOMC & NFP. All that is going to make it hard to just pick a post-election result trade that has a clear run that won’t be affected by everything else going on in the world.

Down to the soup and nuts.

One thing that has stood out is hearing the lack of positioning for this election. Trump beating Hillary was a big shock to markets and they haven’t forgotten that in a hurry. We already know that a lot of money is sitting on the sidelines with traders more concerned about the risks than positioning for possible outcomes. If big money is sitting on its hands, we need to factor that in. When (and if) that money starts flowing in, that will be where the bulk of the volatility comes from and we could be in for some decent moves. Again, that’s all based on what sort of outcome we get, clean or messy. At the moment we’re probably seeing a lot of pre-election squaring and exposure reduction. I personally am not really interested in touching anything that has a USD badge on it, be it FX, bonds, stocks, commods, between now and sometime after the election, at least until things become more clear. I have some USD positions in my long-term book which shouldn’t be too shaken by this short-term noise, and I’ll be making decisions about what I do with other short-term USD positions I’m holding at the moment. Right now, the best course of action is making sure I protect my account, more than trying to punt on the outcome. Markets and opportunities will be there long after we’re over this event hump. If I had to pick something to watch for perhaps the cleanest indication of post-election pricing, it would be US yeilds and the good old 10’s for a guide. Bonds are usually the go to indicator for things like this and they can often become the driver for all else. Where yields may go, so may go the dollar.

Outside of trying to understand the risks I do have to consider what might happen in terms of who will win, and I can’t split Trump or Biden. I am not from the US and so nothing I’m about to say is political, it’s merely my outsider observation that I’m making to which I might be able to assign to possible trading outcomes. I understand politics is a heated subject in the US right now and I’m not taking any sides here.

If Trump was up against Hillary this time, I would have her as a banker to clear up in this election. But, we’re not there. A big part of Trump winning was that people saw him tearing up the rules. He wasn’t a career politician and it was a wake up call for US politics that people weren’t happy with the political establishment. Now, the question is whether those same people are happy with what he’s done so far or if they think he’s failed. That will cause the main swing to or from Biden. On the other side, from an outsiders perspective, Biden doesn’t seem like he’s quite all there. He’s been in the game a long time, he’s seems a bit senile. He just doesn’t look like someone who can inspire. He also doesn’t seem to be railing to hard against the unrest we’ve been seeing in many cities around the US. That’s a boost for Trump who has. I can find a lot of similarities between the left/right divide in this election that I saw in the last UK election, and perhaps that may play out here also. The Labour party were much more left-leaning and they were making most of the noise in campaigning, the press, and polls, much more than Boris and his party. Many were saying they would sweep in, yet they got handed one of the bloodiest noses in a long while on election night. This may be something that’s also detrimental to Biden and may possibly lead to a similar outcome for him.

For Trump, nearly everything is about his record so far as opposed to what he’s going to do in the future. The trading saying “You’re only as good as your last trade” is very apt here and the voters will be taking his last 4 years (and more so this year) into account, and that’s where Trump might be in trouble. He seems to have gone from great deals with China, making up with North Korea and building walls, back to square one (and even falling off the game board). He’s now closer to war with China than a trade deal (see the Taiwan bunfight), not to mention his views on the virus, Little Fat Boy is back playing with his fireworks, he’s torn up trade and other international agreements and I’ve no idea how the wall is coming along. His constant shouting, and often juvenile rants, on twitter is becoming somewhat tiresome and unbecoming of one of the most powerful men in the world. All that might be what swings a lot of his supporters over to Biden.

I really can’t pick the winner in this election and while everyone seems to be believing the polls once again, I wouldn’t be in the least bit surprised if they turned out to be wrong again and Trump wins. Either way, we’ll have to deal with whatever way things fall.

Elections in the UK (and other countries) recently have not been about voting for the best party but voting for who we think is going to fuck things up the least, and I fear that’s the situation happening in the US. If that’s the case, it’s a pretty sad state of affairs for all of us and I wish our American friends the best of luck with it all. On the trading front, stay safe, think about the risks and whether you want to get involved, and good luck in your trading.