A look at the 2 new BOJ Deputy governors 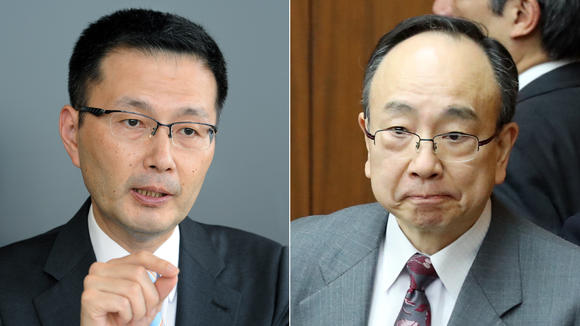 And especially Masayoshi(Masa for the friends) Amamiya

Mr Wakatabe , known as a reflationist, is Abe’s confirmation to the markets that the trio running the BOJ during Kuroda’s 2nd term will keep pushing the pedal of the heavy easing
monetary policy. Most interesting is the nomination of Amamiya-san( on the right of the picture), instrumental in both Abe- and Kurodanomics, a 37 year old BOJ veteran and close ally, confident and man-to-go-to for Kuroda.
Bloomberg has a very good sum up here and here of who the man, behind the scenes so far, is and will need to be once he steps into the light.
The view of Japanese economists and BOJ watchers is interesting as where most of us, me included, thought looking at the three nominations, ok this is going to be another few years of the same,
things may just be that tad different. As Amamiya was instrumental in creating current policy, he may equally become the architect of how to move away from it, and most importantly come out to explain what Kuroda may find difficult to bring to the public on his own. So many depend and so deep is BOJ entrenched in its policy that it may be much for one man alone to climb back out of the hole without making the walls collapse on it. So far the BOJ crew hasn’t budged and we can expect some more of the same, but my expectations of things starting to move in some form in Spring after the wage talks, supplementary budgets kicking in, is still very much in play. At that time Kuroda’s second term will have officially started and both Mr Wakatabe and Amamiya can start addressing the markets. Amamyia should be the one of the 2 deputies we should pay the most attention to for details in changing of words.
Interesting times ahead.
Some additional BOj watchers opinions in Bloomberg