Japan’s life insurers and pension funds are big big players and they can drive markets across the globe. Even though we’ve seen a big sell off in bonds, there’s still got to be someone buying them and the rising US yields are looking very ripe vs zero yielding JGB’s. In the last numbers from the MOF (for Jan), Japanese insurers increased overseas debt holdings to the highest since August 2016. However, other investors have been selling at the end of Jan, and into last week, to the tune of $22bn. If the life insurance mob are getting in, it’s pretty safe to assume that the other institutions are too.

What this means for bonds and FX is that while there’s currently a big move to shift out of bonds and into other assets, there’s some very big players hoovering up what others are selling. They key point for us trading is that we now know there’s some big fish swimming around the 105-104 area in USDJPY, and that information is gold. We can pretty much use this news as an indicator on the charts now but bear in mind that these folks tend to scale in and layer their orders. The low last week could well be one spot they’re sitting at. 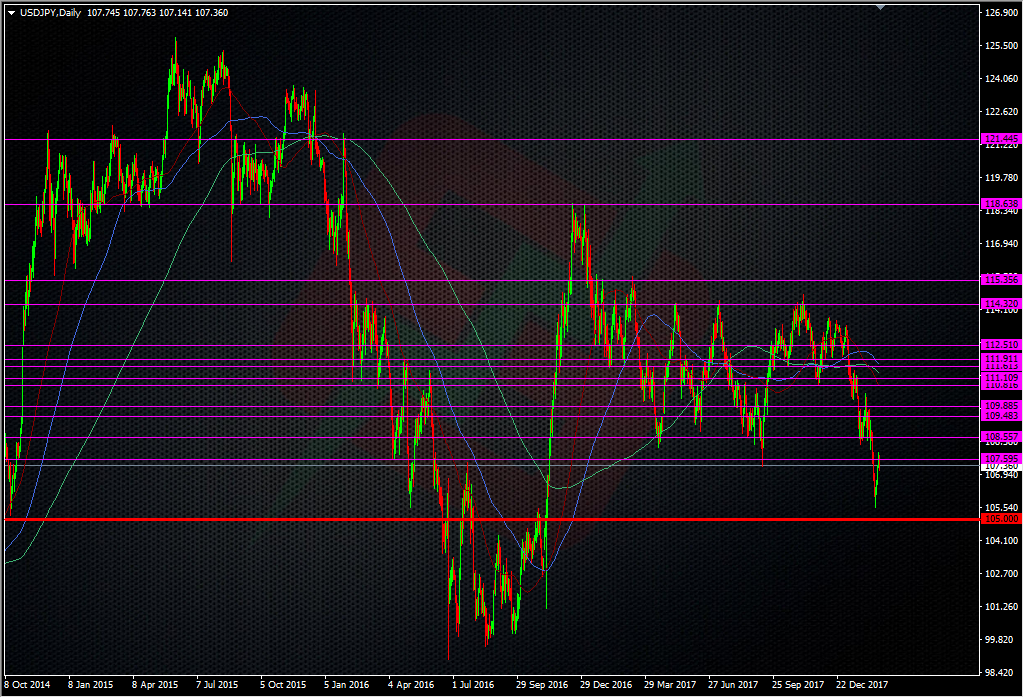 While I’m still bearish on USDJPY, knowing there’s potentially some big support around 105.00, makes it a level I’ll either look to exit shorts into, or start taking longs from. From a long perspective, scaling in buys from 105.50 down to 105.00, with a stop underneath offers a fairly tight trade. If I wanted to push the boat out then buying in smaller size all the way down to 104.00 is another option but I’d be concerned as the 105 level seems the bigger of the two, so a break could be bad news. Don’t forget also adding to the support picture is the binary barrier options at 105 & 104 too (which we’re increased during last weeks drop). The way it’s looking, the 104 level could be a big defining level if it breaks. In the near-term, the 108.00/50 area is still the level that’s important for how USDJPY plays out now. Keep bellow and the bearish pressure remains. Get above and there will be further relief for bulls and they’ll probably have a crack at taking it up to 110.00

As ever, nothing is guaranteed in trading, and some of these guys we’re buying bonds and USDJPY as it broke 110 and 108, and they didn’t manage to halt it then, so we’ll judge any moves on their merits at the time.