Trump, tariffs and talking BOJ – What does it all mean and how do we trade USDJPY now?

USDJPY takes a bashing as the news comes from all angles

Where to start with this one?

The first one is something new but it’s wide open for missinterpretation. It could mean anything, a change of YCC parameters or a shift in other policy areas further designed to achieve the 2% target. The market has taken it as a hawkish comment that the BOJ might tighten before they hit the 2% target. If there’s one thing we do know, the BOJ are hell bent on hitting this target, so the chances of them easing back on policy are very remote. They may change things up but they won’t tighten up. If the market is buying yen on that, it’s got it horribly wrong. But, we can’t fight the market and here at ForexFlow we’ve said since before the start of the year that the market’s attention will be zero-ing in on the BOJ this year, and that’s exactly what the market has done. It’s all about the expectation of future tightening, not what’s actually happening now. The market has its bone and this proves it. Do we fight that in trading against it? Maybe in the short-term moves but overall, we should go with it. If you fought the ECB expectation trade since 2016, it would have cost you plenty. That’s why we learn from those lessons and apply them to similar situations to gauge possible price action.

Trump and his tariffs

A double whammy for USDJPY. As Kman wrote on the Live Blog, the comments from Toyota are insightful.Tariffs wil negatively effect Japanese car makers in the US. That will have a knock on effect to Japanese car makers profits, and that in turn will negatively affect Japan as that’s where the money goes back to. On the otherside, higher costs in Japan for tariffed materials will get Kuroda to his inflation target faster but it won’t be the right sort of inflation that can be controlled by BOJ policy. In the bigger picture, and for the USD side of the trade, a trade war takes a step further forward, and that’s a big negative for the dollar.

When you stack it all together, there’s just too much weight on the dollar and too much weight on USDJPY, which comes at a time when the pair is in a bearish trend in the first place. You don’t need to be a qualified economist to work out when bad news mounts up, and which way you should be leaning.

What now for trading USDJPY?

Whatever the noise, whatever the news, we always fall back to the charts. If the news makes things confusing, let the charts make things simple. The USDJPY chart is quite simple. 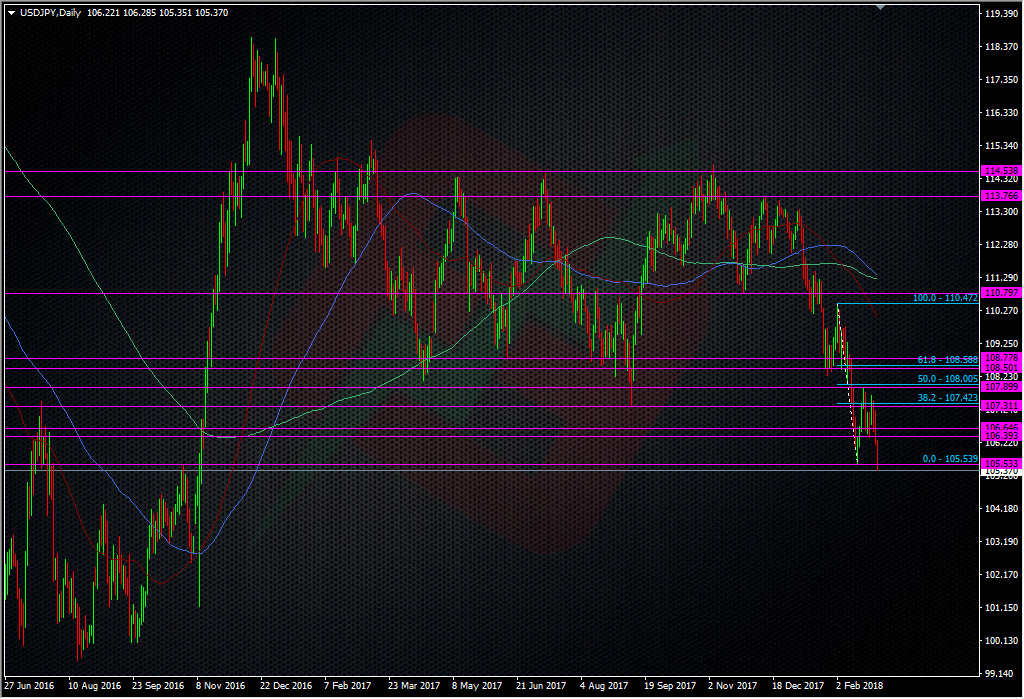 The chart shows us that the. The 200 MMA is also at 105.56 We’re creeping lower towards it but we also know that there’s a lot of potential support down here, as we posted about recently with Japanese financials and importers on the bid around 105.00 and below. We also have Binary barrier options lined up at 105.00 & 104.00*.

105.00 is going to be the next big level to watch now 105.50 has gone. If that breaks things could accelerate if the mnarket steams through the buying interest there. If you’re short, that might be a place to take some profit off the table in case it is strong enough to hold. If it then breaks, look to go with the flow. If you’re not short already, look to see if we do bounce, and then look for the good resistance levels to lean against. 107.00/50 is the biggest area right now. Should we break 105.00, there’s a real danger we will look to test the big 100 level after. That’s about the only level I’ll be looking at taking a decent long from, and until then, I’m looking to sell the rallies

*We’ve heard today that some of these barriers will be expiring next week. We don’t know which ones but I’d guess that it would be the binaries rather than the normal ones as normal barriers tend to sit in for a long time. The binaries were likely linked to the recent hedging of a steeper drop through 105. Wie’ll update you as we hear more info. It’s also a bit messy because some of these could be importer/exporter related and tied in the end of month/new month trading.