What are you seeing Kuroda-san for your next BOJ meeting on 31st July? 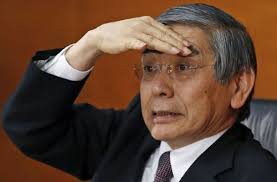 A word of caution on JPY after the Reuters pieces

First: The Reuters article sites “sources close to BOJ thinking”. These are by no means official comments.
BOJ watchers have repeatedly pointed out in the past months it was about time BOJ came up with some form of change as costs of the ultra loose policy are outweighing the benefits of it.New it is not really

Second: So far BOJ board members have not hinted at abandoning the inflation target, let alone firming up the policy. Don’t forget the latest two additions to the board, Amamyia and Wakatabe are hardliners of the current “ultra” policy. A change may take more than one debate to convince them into action although we have had surprises in the past with Kuroda. But compared to these two, he’s nearly neutral ….

Third: Don’t forget as mentioned several times before that BOJ is already running well below their JGB/ETF buying targets as they own the lion share of these babies anyway and banks complain about their ” drying up the competition” and keeping rates to low for especially the regional banks to operate under normal conditions. They have several times, no later than this week again, scaled down the amount of purchases in what I would call a “not so stealth” tapering move.

Fourth: The market tends to run away with this kind of information as if it were a done thing already. There is still more than a week to go before the BOJ meeting on the 31st July and especially this weekend a G20 in Buenos Aires where Finance ministers and Central Bankers meet, discuss and have a laugh…, And where Kuroda can easily dismiss today’s comments. An easy way out for him would be to say the discussion has not taken place yet. But if he does a “Davos”,we could find USDJPY sub 111 come Monday….
Be aware of the weekend risk is my advice!

Fact is and we know that inflation will likely not reach 2% in Japan for a loong time. Negative consumer spending numbers are forcing companies not to pass price hikes onto the the customers. Apart from putting the NIKKEI up by 100%, QQE and YCC have not accomplished the so much hoped for higher local investments to spur long lasting economic growth either and Japan’s demographics are such that even if with a tight labour market, the tight immigration rules not providing enough wallets to be filled, the real wages are not even exploding for the younger generation to go on a spending and risky asset buying spree.

Since I’m not in the board of BOJ, nor knowing who whispered into Reuters’ ears, assuming there is truth in the stories and BOJ will make some changes.
What can they do without derailing the little that has been achieved, which will be their biggest concern?
They can acknowledge, which is an increasing possibility, that inflation won’t reach their target any time soon. The can officialise a lower target for JGB/ETF buying, bringing it closer to what they actually buy these days, call it half of previous target for instance. They can, which the market would take as a bigger change, put short term interest rates at zero from -0.1%  and relax the grip on the 10 year rates to bring it from zero to a target zone, zero to 0.1 or 0.25% for instance, which would give some leeway to the local banks in their books. That in se could provoke some reaction to the JPY but they will make sure to keep interest differentials with US at an as high possible level. And they have ECB’s excuse behind the hand not to do much.

More than that would be a revolution at the BOJ in my opinion. They are likely to firmly keep the notions of QQE and YCC intact in the text just to show they’re not abandoning anything but at the same time listen to the interests of Japan and give themselves some wiggle room. They could counterbalance any gifts by saying extra stimulus is never far away in case they judge relaxing the grip would have negative effects just to take some back with the right hand what the left has given a moment before. They are very conscious that a tightening of the monetary policy would send the JPY higher and put Japan’s main bread and butter, the exporters, under pressure. Especially these days in trade war times and with a POTUS already putting them under pressure without the market needing to take care of it. They will make it their duty for it to be a smooooth as possible.

Now all this being said, I am small short USDJPY myself from earlier today, which I trimmed to a tiny here around 111.70 as we draw closer to the end of the week. 113 around capped with exporters filling buyers’ boots this week. Trump directing all of US financial activities now…, and the market even giving him credit for it, the higher probability is still for the downside to prevail for a while as trade wars don’t seem to abate either. Option vols are also skewed in favour of JPY calls, albeit shorter term, so that’s only a small part of my reasoning. USDCNH though found local offers, submarines or not, above 6.8, the correlation with JPY is undeniable of late.I’m keeping a close eye on the cross . The risk/reward is still in favour of small JPY longs. Keeping it light as I mentioned the weekend G20 risk, let alone BOJ in 11 days.

That’s my 2 bucks on today’s happening in JPY land. Find the links to the Reuters articles that got the disco ball spinning. For those leaving us now, enjoy a fine weekend, get some rest , do funny things and shape up for next week. FX adventureland is open 24/5.