What did we learn this week? – CNN are most definitely off Trump’s Christmas card list

As the referee is wetting his lips to blow time on the week, are we any the wiser for it?

There’s never a dull moment in forex trading. Actually, that’s a lie as the first two days of the week might as well have been a holiday as nothing much happened ahead of the elections. Trumpnasia was put to the test late Tuesday as the midterms brought some life to markets but even then, we didn’t move mountains. The expected outcome happened. Trump kept one house but lost his holiday home. The presser was an absolute circus when he kicked off with a CNN reporter and all toys came out the pram.

The elections proved the turning point for markets and as the dust settled we found ourselves back in a risk off mood where EM’s were sold and USD was the safe card alongside JPY. USDJPY had one of its hill climbs from 113 to 114 but failed to take the level with real confidence and so looks to end the week under it. It was as if the market had put everything on hold for the elections, even though not much was expected.

The wheels came off the CADdy wagon on a mix of collapsing oil prices and the US trying to slip different lines into the new USMCA agreement. That was picked up by eagle-eyed Canadian pen pushers and they went running to the bossman waving the offending papers in the air. That threw a bucket of worries at the new trade deal but even when it was remarked after, that the differences were unlikely to change anything, CAD traders weren’t having it. A big reason for that was two further kicks in the knackers as the price of oil prices continued to fall out of bed (yes CAD’s back on that train), and the Keystone project saga hit another brick wall. You couldn’t budge USDCAD with a red hot poker on Monday and Tuesday but it made up for it in the rest of the week, as today we tested and marginally broke the strong 1.3200 and then 1.3220 resistance area. Like USDJPY, that break has struggled to hold and although we’re back below the 1.3220 area, we’re looking to stay above 1.3200 (though that’s looking iffy as we’re currently at 1.3202).

Thinking about it, the week has been about testing range and strong technical highs. NZDUSD was another. About the only currency that had reason to hop on its bike was when a strong jobs report caught the market off guard. With an impending RBNZ meeting the next day, Tippex lids popped like Champagne corks as folks re-wrote expectations with a more hawkish slant. The RBNZ weren’t for shifting over one data point but they couldn’t ignore the recent bout of some good data so they came out pretty neutral rather than the dovish tack they had before. NZDUSD bolted from the mid-0.66’s all the way to a strong resistance area near 0.68. An excitable RBNZ pop took it to 0.6815, well within the tech levels, and that was that for it going any higher. The broad USD buying has seen it push back to the lower 0.67’s but it’s not undoing all the good work.

And then we have Brexit (shudder). I’m becoming increasingly frustrated with it all because it’s turning into even more of a circus than it already has been.  We’ve got leaks, counter leaks, denials, resignations and plain old stupidity. Half the problem is that May/Raab are negotiating stuff with the EU and the UK press are throwing out all sorts of “sources” stories about what’s being negotiated and very little of it is being substantiated. So, all the other ministers and parties (including the DUP) are all getting their knickers in a twist over stuff that may not even be true or part of the deal. At times this week we’ve not been trading actual negotiating stand points but people’s impressions of possible but unconfirmed standpoints. I’m getting a right headache over it. How do I summarise the quid this week? Well, it’s looking a bit like Mount Everest this week. 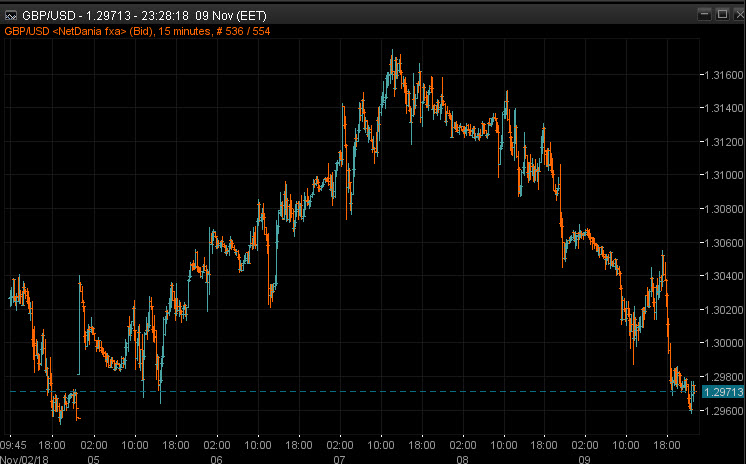 Be on guard for more Brexit busting headlines this weekend and the possibility of fireworks at the Asia open on Sunday.

That leads us nicely to the Euro. Truth be told, there’s not much to say, yes, we’ve had moves, and pretty much a test of both ends of the 1.1300-1.1500 range but none of it has come from much EUR related. Yes, we’ve had some additional crappy data from some countries but really the most liquid and traded pair in the FX world has been pulled about by the short and curlies by everything going on elsewhere. 1.13 was the focus today but the fresh support since the last test looks to have kept the wolves from the door for now. It we do get a test, I’m growing increasingly doubtful that it holds again. The question will be, will it break properly or will we just flush the barrier and stops and then rally back through. Watch this space.

On the trading front, I’ve not had that good a week but I’ve not done much either. I’ve just been one step behind the curve this week and reflecting back on my trading logs, I can see I was pissing about in the middle instead of waiting for the well known edges. That’s a sign of impatience and something I need to stamp out. Losses are part of the game though and as long as they’re controlled, they can’t do any real damage.

I hope you all have had a great week. It’s been another great week in the trading room and it’s going from strength to strength with more new arrivals. If you want to see what’s on offer, there’s some information here. I’ve got the registration open for new members but only for a limited amount as I don’t want to flood the room with too many new members at once. The community is growing but I’m going to grow it slowly so that news members can settle in properly.

And it’s those guys and girls in the room I thank now, for their support to their fellow traders, the advice, the analysis, the trades and the laughs once more this week.

As usual, my thanks to all our readers, commenters, tweeters and all the rest. Your support of the ForexFlow project is immense and much appreciated.

The same for my colleagues at the flow, The Chinaman and the Belgian. Heaven help us the day we all end up in a bar together 😉

Peace, love and have a great weekend.