The big tournament week for the AUD starts tonight. 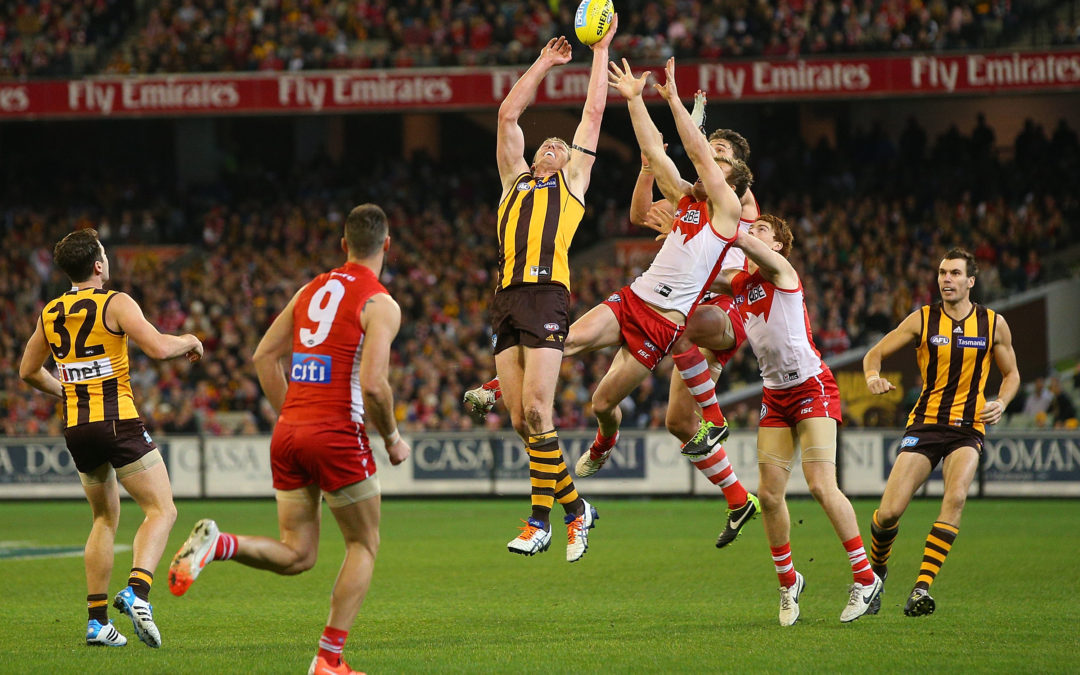 Getting ready for potentially serious moves

The week starting tonight has the potential to show us the direction for AUD, and probably NZD in the distance, for a decent amount of time.
It starts with the CPI tonight, we’re going to have credit and housing data on Thursday and Monday, PPI’s on Friday, retail sales and the cherry on pie next week Tuesday. In the meantime of course there will be the all important for the Australian economy US-China trade talks in Washington.

Barring a decent labour report, positive new home sales in stark contrast to negative building permits, the rest of the data has started to slip. GDP was lower, the last CPI data dipped under RBA’s 2-3% target zone and it wouldn’t take much for everything to roll over. the latest bank hikes in mortgage rates are not going to help the housing market. I would be surprised to see CPI up tonight. The market is expecting a further 0.2% decline in the headline number to 1.7% from 1.9% , trimmed remaining at 1.8%. Taking a shortcut to next week’s RBA, they should not move the rates now but the language may change for the more protectionist tone. That on its own should be enough to keep further AUD strength contained imo unless a big surprise in either CPI or credit data.

But of course the market will be looking mostly at the US-China trade debates. China seems to be going in with some goodwill to negotiate a deal looking at the proposals and the latest plan for structural reforms, including on the intellectual property front to come some US’ way. But it may go pared with some demands (Huawei?) and it wouldn’t be China and the US if there would be some heated discussions around trade practices and the timeline of proposed levelling out of the trade imbalances.China plans to do it in 6 years which coincides with their 2025 vision to become a global tech giant. The teams are in place, heavyweights will be attending on both sides. Not sure we’ll get a definitive answer to the question if the trade is done or not this week. Both sides are repeating they want one, China needs it to stop the rot at home, Trump to proclaim himself as the saviour of World Trade. We’ll see when the both side will come up with their meetings communiqués and what Trump will have to say about it all.

The prolonging of the lower tariffs period together with China’s monster injections into its economy to curb the slowing growth have helped to underpin commodities, AUD and NZD off late( barring the 2nd Jan flash crash) and hopes…but any hick up could see a quick end to all of it as the market will anticipate an even slower global growth. In turn an upbeat statement will see the prospect of higher tariffs end March drop a few notches, the markets anticipating a better growth outlook and AUD turn up again.

Strap yourselves in, this could be one wild ride. Unless I jinxed it by writing this and AUDUSD wakes up 0.7150 next Tuesday, I expect some serious swings to unfold and possibly take a new direction. It’s going to be a case of navigating heavy seas between data and politics.
In case of a double whammy, worse data and US-China trade talks not seeing any progress, the 0.70 level will rapidly come back under fire and I don’t exclude a revisit of the 2nd Jan flash crash lows. There’s also a head and shoulder formation developing with the lower neckline at 0.6960 approx if we for the ease of reading the picture consider the flash crash as an anomaly. That makes the 0.6960-0.7000 zone as the major support area.
If in turn we get better data and an upbeat US-China result, the 0.7230/50 area is going to be the one to watch. Breaking above there would put the H&S in the cupboard for now and a retest of the early Dec highs around 0.74 is certainly within reach. IF we get a trade deal that will be my major area of resistance/break.

It’ll probably not be all that black or white so in between the headlines and the drops I will start by looking at either side of 0.7080 and 0.7205 (top of the daily cloud) for the immediate trading as long as we haven’t had definitive news. Based on pure economic data, I have a preference to open rallies short first without forgetting to buy back in those high-mid 0.70 dips until we have more definite trade news. After that I’ll surf the positive or negative waves outside 0.70 and 0.7250. Let’s get those CPI data first tonight.

As usual be careful with your sizes and make sure to be protected as headlines can hit any time this week.

I’m including the expected AUD data below and both charts with or without the flash crash for level viewing. 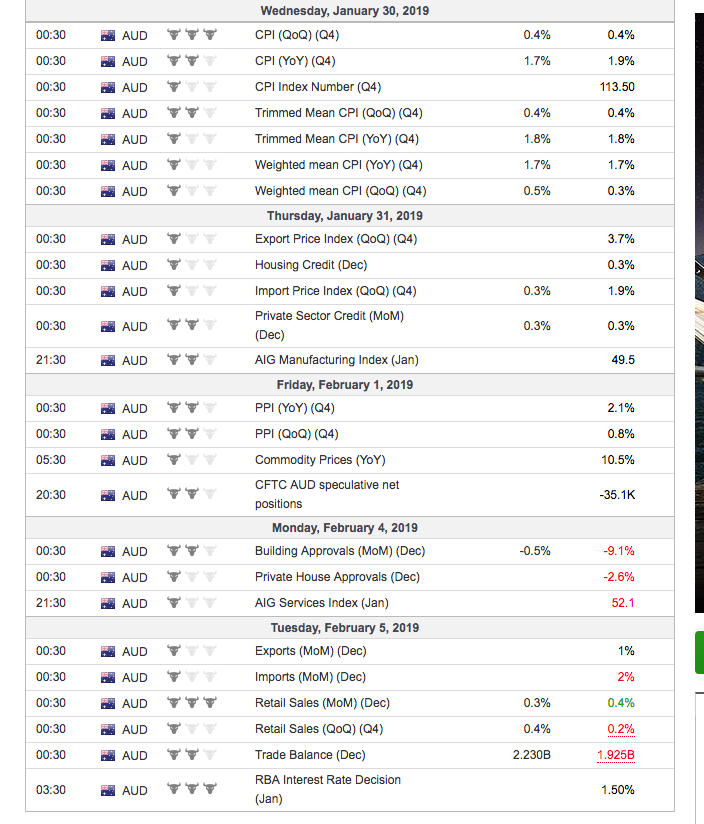 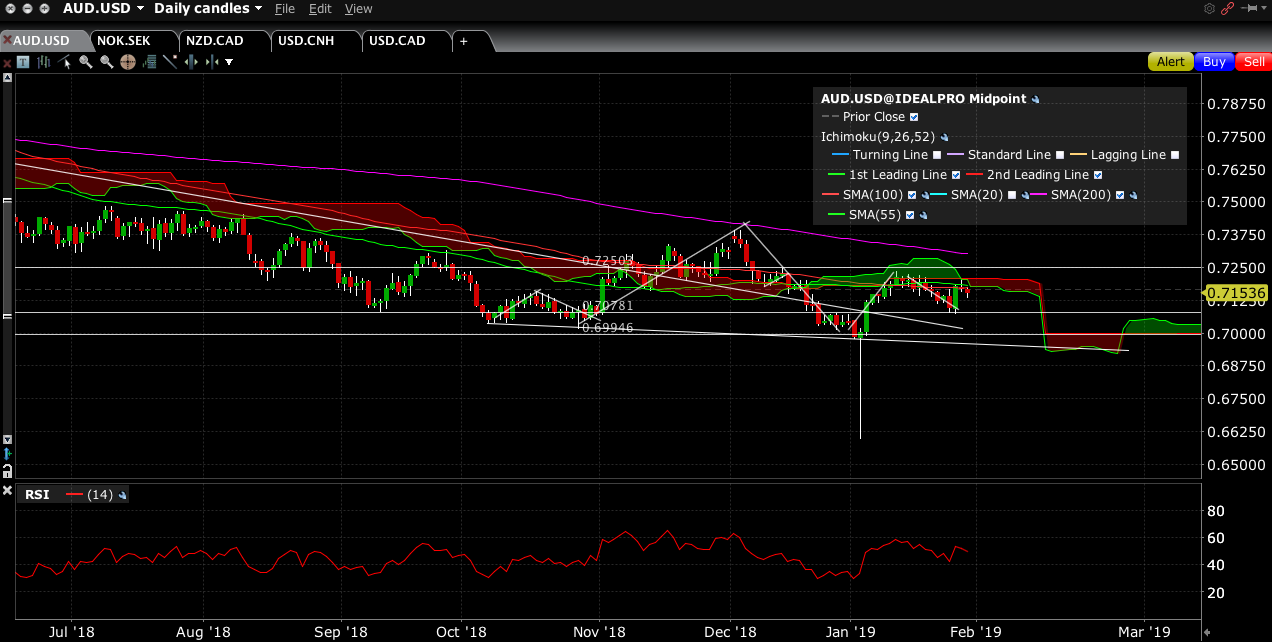 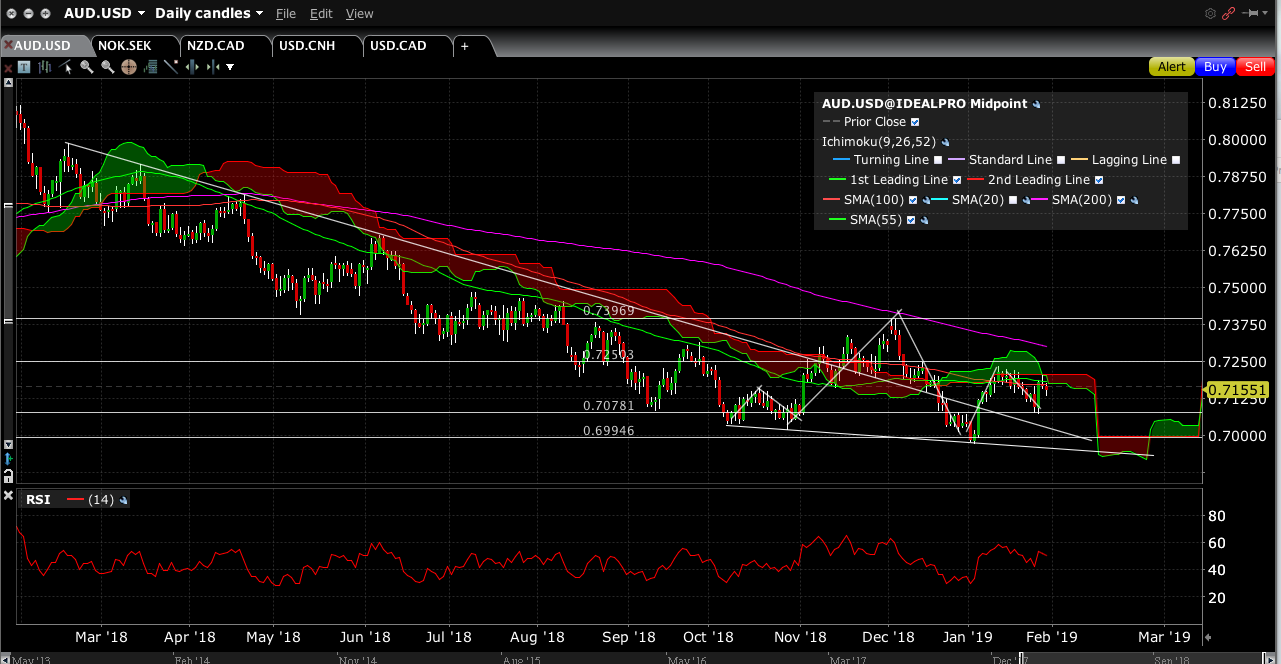