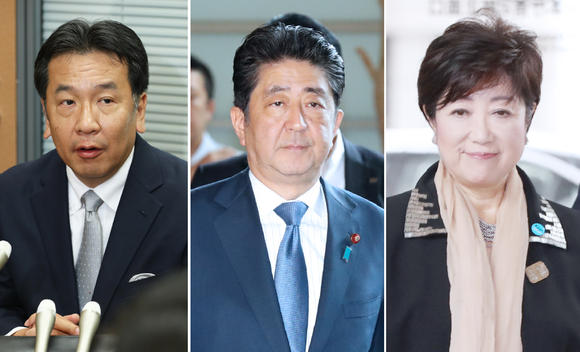 Yuriko Koike will push candidates but not run herself

As she hinted before to concentrate on Tokyo and surroundings, she now confirmed to “try” push enough candidates to challenge at least 233 seats to obtain a majority in the Lower House, but not run herself as Reuters reported .I’m not sure that this decision will go down well with the targeted electorate, hoping for her to be on the frontline, a direct challenge to Abe. So I say “try”…
Indeed Yukio Edano, the Democrats’ left-leaning deputy president, will lead a new Constitutional Democratic Party(Rikken Minshu To) to attract liberal votes in the Oct. 22 race.He will meet with the Japanese Trade Union Confederation (Rengo), a formidable ally, who are now in support of Maehara’s Democrats, who joined Koike in his attempt to “Stop Abe , no matter what”. Success in doing so could see several left wingers swing back from the Party of Hope to Edano’s side, especially the ones who don’t agree with Koike’s refusal to endorse the alliance of Democrats who do not support enhanced national security and changes to Japan’s pacifist constitution.
I remind you Koike is a right wing contender, wanting to revise the Japanese Pacifist Constitution even further than Abe, the most notable difference being she doesn’t want another tax hike.
Hardly in line with the Democrats and Liberals,pacifists and Maehara himself pro tax hike.
You see where I’m going. Division is never a good thing. I reckon it brings the re-election of Abe a step closer with the opposition doing half his work.
Next Monday the candidates should be endorsed, a fast nearing deadline.
If the same team remains in place, there are fiscal and monetary reasons enough to expect the JPY to remain on the defensive.
Updates to follow.