The Brexit Review: Why did May ignore the Irish border solution sitting right under her nose?

Jake, possibly the next leader of the UK Conservatives and likely Prime Minister, had the solution to the Ireland Brexit stalemate all along, but no one was listening

Rees-Mogg firstly challenged Ireland and the EU to erect a border if they didn`t agree to UK proposals. A good negotiator always tells the opposition what their alternatives are.
The current round of talks are more complicated than just Brexit. The Northern Ireland question is also a thorny issue in Irish politics where the wrong agreement will likely lead to more elections in Southern Ireland and therefore, the ideal solution to avoid an Irish election, is an agreement that maintains current arrangements and future-proofs them. Hence, Irish-led solution put forward and which was eventually, furiously rejected by the DUP in a statement issued while Mrs May was having a working lunch with EU`s Juncker.

Rees-Mogg conveyed his simple solution to Sky News on Saturday 2nd December as follows: Last Wednesday, the head of HMRC said there was absolutely no need for a hard border between North and South to control movements of goods and services. Perhaps people too. HMRC could implement government policy surrounding these goods and services through tried and trusted declarations by companies, importers and exporters in the same way that V.A.T is collected. Rees-Mogg went onto say:

“This is a very straightforward issue and particularly if the UK maintains zero tariffs on the rest of the EU, which I expect it will want to do, then there is very little in the way of customs declarations.” Then he added “Some things are already done on an all-Ireland basis, animal standards are done on an all-Ireland basis, so that is all covered.”

“Therefore, it is up to the European Union and the Republic of Ireland if they wanted to impose their own hard border, but the UK wasn’t going to, didn’t need to, and there is your solution.”

A simple solution backed up by electronic surveillance and accounting made ever more complicated by politics aside from Brexit politics. 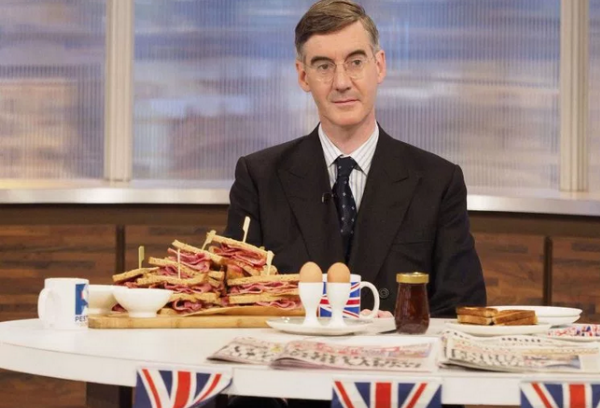 Jacob Rees-Mogg: The man with a plan no one is listening to.

It is difficult and unbelievable to see how the DUP were not aware of the proposals put forward by Mrs May today, but politics is a dirty game. Put twi scheming ladies together and my guess is this is what you get. EU`s Juncker said at the joint press conference that Mrs May is a hard negotiator. That was not said to help smooth the way for Mrs May. Juncker doesn`t help anyone.

The Irish government is now side-lined and frustrated. Their proposal is history and they can only use their veto with permission from the EU who can cancel it if they feel it right to do so. A new and acceptable solution for the UK, including Northern Ireland is Jake`s solution. Rough game politics. The DUP are more than likely to agree to such a solution as they are stuck between their own rock and hard-place. Ireland and the EU might feel compelled to have to agree to such a solution. It`s all they have, now that Mrs May has tried her best with the EU`s proposals (via Sothern Ireland) and the DUP threaten to pull their support if an unsuitable arrangement is forced upon them. IF that happens, then it will likely be a general election in the UK and possibly a Labour government. The EU does not want that.

An agreement on all three issues is needed by the end of this week (8th December). Sterling has taken all this in it`s stride so far and currently trades $1.3425 from a day’s low of 1.3370, after reaching a high yesterday of 1.35281. I will look toward buying a dip to 1.3350/60 area and if I cannot get that, I will buy perceived value after watching the PA. Much depends on the USD and yield spaces. With Sterling still buoyed by open interest contracts/volumes still increasing. Implications are cable higher.

As this post was written late last night, the prices have been updated and I am long GBPUSD this morning at 1.33785.

Trader in Forex, Stocks, Apples and Pears.
Philosophy: "In every expert, there was once a beginner."

Read how Si got into trading here