UK Autumn statement preview: All aboard HMS Hammond for the Brexit Budget 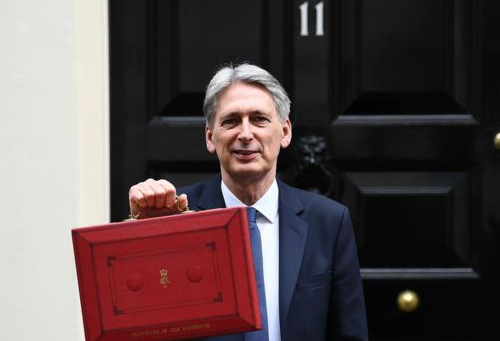 Can spreadsheet Phil keep the sinking ship afloat with a Budget for all reasons and all seasons, or will he risk walking the political plank?

UK Chancellor Philip Hammond (PH) has some tough calls to make for his Brexit Budget. Brexit Budget? It is indeed all about Brexit as he needs to satisfy markets, Brexiteers, remainers and a swathe of voters via their constituency MP`s to at least call the beginning of the end of the era of austerity amidst a remarkably resilient economy. Autumn budgets nearly always tend to play second-fiddle to the March budgets and unless this budget becomes an emergency budget like the one that the Labour Party are calling for, then it will likely be a fairly low- key event except that Brexit is indeed to be considered as are the public finances. With that in mind, it is fair to say that all bets are off. This one is too close to call. On the public finances, Daiwa capital Markets say: “But while the situation appears to be better than the OBR and the government itself hoped, the projections in tomorrow’s Budget are unlikely to show that the borrowing trajectory over the coming years is tilting further down, given that there are plenty of factors working in the other direction”. A realistic assessment.

In what might be the last Autumn Budget, as changes take place to have just one annual budget, the usual growth forecasts will start proceedings off in market terms and any changes to previous forecasts will move markets either way. The March Economic and Fiscal outlook for 2017 from the Office for Budget Responsibility is here and take note:  The likelihood is that recent BoE projections will be confirmed but beware of surprise(s).

Against the backdrop of Brexit, the maintaining of a “war chest” to deal with Brexit effects is crucial to dampen the consequences of what is likely to be, a further slowdown in economic activity for the UK and to deal with the unknown consequences, should a hard-Brexit or “cliff-edge” scenario occur.
Business and markets are going to want clarification on proposed changes in Corporation tax (CT). Essential for business to plan and invest. Confirmation of the reduction in Corporation tax from 19% (which applies in 2018 and then down to 17% in 2020) to boost inward investment that has lagged recently due to Brexit worries. Legal aspects surrounding the proposed reduction in CT would be a markets/business friendly bonus. These reductions are evermore essential as the US plans to reduce their CT rate to 20% in accordance with their tax plans. PH will be keen, if not compelled to maintain the UK`s competitiveness in that area. He might roll out Research and Development support measures and incentives into a business- friendly approach in an attempt to dampen some Brexit fears in the business community.

To help avoid a further slowdown in economic activity, PH will need to announce measures that will stimulate demand. While he is likely to announce that the Brexit war chest will be maintained, he is widely tipped to announce measures that will encourage developers, large and small to build 300,000 homes per year until at least, the end of this current parliament. Measures to support this are likely to surround planning and availability of land suitable for affordable homes, encouraging local authorities to build more council homes using funds many already have stashed away for a rainy day and in case central government insists on changes to local taxes and perhaps a commitment to help first-time buyers by way of a new help to buy scheme and maybe something on Stamp Duty. He will not want to increase borrowing requirements to fund any initiatives. His priority will be to protect the public finances, but he will be acutely aware that he needs to stimulate demand. However, despite the need to protect the public finances, he might do something for the NHS by way of lifting the Public Sector pay cap for NHS workers, especially nurses and doctors including GP`s by announcing an increase (into the future) of the NHS itself but concentrate initially, and for the more immediate future on pay. Markets will want to see evidence of how he would pay for the initial lifting of an austerity measure that has contributed to an overall lowering of borrowing requirements.

After the recent U-turn on National Insurance increases for the self-employed, look out for any announcement on changes to employer`s contributions which if levied, would help the treasury fill the gap left by the climbdown on NI. A contentious subject for business but the public finances have to make sense. Watch that space.

Look out for the potential lowering of the VAT threshold which currently stands at £83,000, lower than the EU members average. As unlikely as it seems, it could be a tempting option for a Chancellor in need of additional revenues as would increases in prices for tobacco and alcohol, the traditional soft targets.

While 80% of small and medium sized businesses see the lowering of CT as a route to drive growth, changes in VAT and employers NI contributions might complicate their expectations. To give with one hand and take away with the other is a regular feature in budgets. Recent reports have highlighted that many businesses are unaware that they may qualify for Research and Development schemes run by central and local government. Some clarification on that by combining the schemes and offering more internationally competitive net tax rates of the Corporation tax and Patent Box rates (equal rates). Infrastructure is an area where the Chancellor is under pressure to act. Tax depreciations simplification(s) and write-offs simplifications re-instated to replace the latest tax regime would make it much easier and more lucrative for foreign investment to invest in infrastructure. The sector is very dependent upon foreign investment. Simplifying the rules on REITs would go even further to make UK infrastructure more tempting to foreign investors, especially in targeted areas like the Northern Powerhouse amongst others.

The single-minded message from business and markets has lately been simplification and for the delivery of a realistic growth programme to help business cope with lower demand and Brexit implications. Business demands clarification as do markets. Hence, this is the Brexit Budget. March 2018 might be too late. Action is expected by markets and business, a more stable government, the protection of the public finances against further deterioration and a definitive way forward is needed. A steady as she goes budget is not necessarily the way forward and with a much- touted cabinet re-shuffle in the pipeline, Mr Hammond has the straight choice between choosing common- sense measures like some or all of the above and more with thorough clarification while protecting the public finances or walk the re-shuffle plank. He really does need to deliver.
Any of the above will help move markets in a favourable direction but to do very little at all with a ‘steady as she goes’ strategy would likely move money away from UK assets markets.

Sterling is well positioned generally as are Gilts. Gilts remain a safe haven for now and Sterling really needs to move somewhat higher as it remains a source of additional inflationary pressures, and so an imaginative and markets focused budget really is of the premium to get the UK moving onwards in spite of Brexit, which has become evermore complicated by Mrs Merkel`s problems in forming a government that can help Brexit proceed.

At the markets US close today 21:30 BST, GBP/USD is supported in the range of 1.3182 levels and currently trading at 1.3230/40 levels. It reached session high at 1.3260 and dropped to session low at 1.3221 level. The Pound was little changed against the USD on Tuesday as cautious optimism around Prime Minister Theresa May’s Brexit bill kept investors from making big bets on the Pound. Britain’s Brexit minister David Davis said on Tuesday that reaching a deal was the most likely outcome of talks, but added the British government was prepared for no agreement with the bloc. Mrs May met with senior members of her so-called inner cabinet team on Monday amid expectations that she will offer the European Union more divorce monies than she committed to during her speech in Florence in September that failed to provide a breakthrough in the stalled negotiations. Media reports said ministers had agreed to make a financial offer that would increase May’s existing commitment, though there were differing accounts, which seemed to be keeping a lid on any gains for sterling generally today. The Independent news website said May’s opening offer could double to around 40 billion euros but it gave no details, while the BBC reported that no specific amounts had been discussed during the meeting. Sterling was flat at $1.3233, not far from a 2-1/2-week high of $1.3279 touched on Monday.

Note: During October, the GBPUSD relationship to 2Yr UK gilts and 2Yr UST`s spreads widened 14bps in favour of USD, weakening the Pound by 350pips against USD. Since October the spread has widened 15bps in the same favour, yet the Pound had strengthened against USD by less than 50 pips overall. Some divergence implying that given some stability or a trigger, the Pound can strengthen considerably against USD and quickly. Take that for whatever it is, but it is there and serves as a warning against blind selling of Sterling. Trade what is in front of you and be nimble. Get those stops in there.