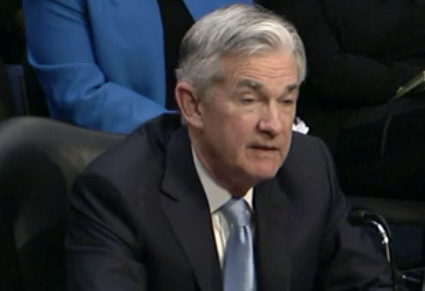 The text should be released on the Fed pages as he talks the mic live. .
Where I, like most observers I read, expect the actual text of the testimony to be relatively down to earth, recognising the economic strength, the need to further raise interest rates,
a relative positive look at the tax reforms (Buffet was just handed a 29bln USD Mardi Gras gift), finally recognising inflation is in the slow elevator.There is a slim chance only the text will give a clear clue on whether Fed will raise 3 or 4 times this year. The reduction of the balance sheet comments will traditionally be “smooth and without market disruption”.
The risk is in the grilling session by the lawmakers in my opinion. Even though he’s in a bigger seat right now and needs to measure his words, we shouldn’t forget that in 2012 he was pretty virulent against the massive QE the Fed put in place. This may filter through again at some stage today, which could send yields spiking and equities to tumble, weighing on risk and possibly cause an initial risk and/or USD sale.
The other point to look out for is how he will react to questions by the lawmakers about the Twin Deficits. There he will probably be prudent without wanting to sound to alarming, but it’s a stick behind the door he has to temper other areas of bullishness.
Initial USD sale as I said but ….If and I repeat IF he paints the story against a real positive economic background, I will be on the other side of the fence today.
We could see a tipping point where yields take the USD for a ride higher, especially as the month end flows are that way as mentioned before. I think the market may find itself selling USD into a hole today, and possibly tomorrow as month end flows will still dominate, if it reacts like it usually does, sell any USD rally.
Not having much on the books in USD lately, I’ve been smalls range trading, I stand ready to pick up a few knives if the initial reaction would be to sell USD on a hawkish Powell testimony. It’ll be yields and equity watching and it could get wild out there but levels of 106.50 and below USDJPY ,1.2350/60 EURUSD and Cable towards/above 1.40 will certainly attract my attention.
If in turn we get breaks of respectively 107.25/30 , 1.2280 and 1.3900 ,we should see decent accelerations helped by the month end flows, which should kick in not long after Powell’s intervention or even during the grilling session.
Caution on USDJPY to be had of course in case risk gets a beating .That’ll probably my smallest involvement.

Last but not least, at 7pm GMT in Washington: Yellen and Bernanke will discuss Yellen’s career at the Fed and talk about the US economy . Even though they’re both gone , there may be a few references made to today’s Powell’s intervention on Capitol Hill and see a few sparks .