What’s to expect from this G20 as Merkel tries to find a parking space? 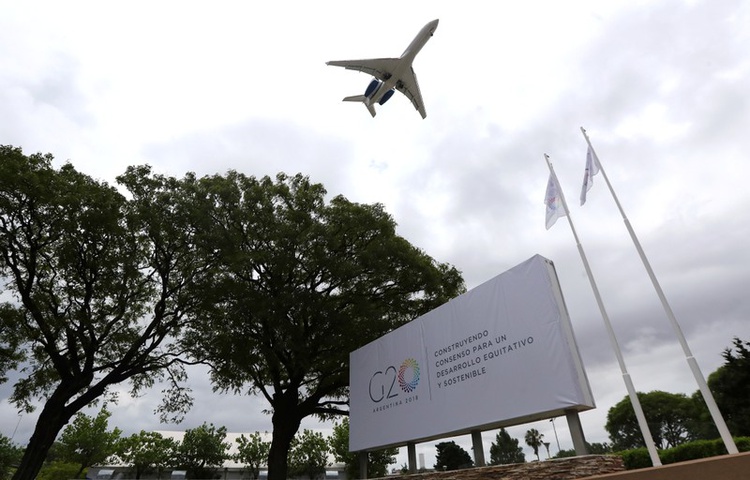 G20 and other algo banquets.

If there was to be a flip the coin weekend and week to arrive for our trading, this must be it. We can only guess what’s going to happen.
WH advisor Navarro joining the Buenos Aires US-China party puts a hawk back into the nest and sending those US naval ships through the Taiwan Strait earlier this week added some pressure onto China. But then Trump sounded a little more (forced) optimistic as US and China officials are working in the background to prepare “something”.

One thing is sure we won’t have anything signed this weekend. But declaring there’s a deal in the making will be enough to send currencies like CNH/Y , AUD, NZD and risk spiking higher come Sunday night. Remember a UK MP’ thumb up sending cable up 100+ points last time for no reason?

Leaving the famous steak country with a hangover and back to “square tariffs” in turn will send same currencies into a black hole. Not to forget equity markets will probably not like any of it either.

In the meantime Putin and the Saudi’s are wandering around in the alleys. No meetings are planned but will Trump and other refuse a handshake and a few whispering words in the ears? Probably not. So ahead of next week’s planned OPEC meetings, that’s another one to take into account which will last another full week. Are we going to get more fireworks on the oil prices? CAD and MXN will also get their fair share of the pie or the whip, despite the smalls positive lines we got yesterday , that they could sign the new Nafta, USMCA today.  One to watch re oil and to a certain extend risk is ZAR. Being an importer of oil and having benefited from the latest fall out, things may evolve.

Euro won’t be left out of the game. Most of the European leaders including Juncker, Tusk, Malmstrom are also enjoying free dining and wining. Or should I say whining. Trump has added some spice on the BBQ declaring he may slam tariffs on cars as soon as next week and at the same time sending an invitation to the European carmakers to meet on Tuesday. That hasn’t gone down well with the EU boyz’ n gals. We may get some heated conversations over the weekend there too.

One currency which may be relatively left alone this weekend, although that’s no guarantee with all that are involved in Brexit wanting their own private one, is GBP. If nothing shocking comes out, GBP could actually be a small beneficiary if the shit hits the fan elsewhere, but that’s speculation from my side, just keeping it in the back of my trading mind.

So the scene is set, we don’t know what’s coming. As I put on the GWTF this morning: MIND THE GAP on Sunday night.
We can expect …I am also expecting things but won’t put my account in danger on a 50/50 right/wrong bet which could cost a fortune as I have no way of getting out where I want. I don’t want to leave the decision of my positions to algo’s tearing the mkt apart come Sunday night and well into next week after all participants, press and other strategists will have reacted and sent a few 1000 tweets onto the www.

Now all these warning being done, I am a trader and trade I will at some stage, maybe not in the first hour though. If I’d be a long term trader( which I am at times), I’d take the next week all in one bag, wait for the dust to settle and then take a medium term opinion.
For the more immediate impulses I will be mostly flat tonight and look where the markets open on Sunday.

If it’s armageddon and the meetings ends up in a fight :

-I’ll be looking at 7 in USDCNH to start with. A test/ break can be expected. But I also think China will step in at some stage. My (very adaptive)plan is to let the fast market go and bury themselves through 7 and then sell it, betting on the Chinese submarines to come in and slap it.
-Then it’ll be AUD and kiwi’s turn. AUD will be the choice, kiwi left me with just that bit to many headaches lately. This one could open right back at 0.7200 which will be the initial main focus. A break could send the bugger another 1-2% lower at least if the heat is on. I’ve got a 0.7140 and 0.7020 as the target levels on the initial move.
-EUR should get a hit and probably see a 1.12 retest at some stage if US and EU start a fight over the car tariffs.
-Risk will get hit. USDJPY but especially the crosses should see a sharp move lower. I’m thinking that if US-EU talks turn sour, Trump sees red and slams tariffs on, EURJPY could see a multi % drop, call it 125/126, pretty quickly. Question here of course remains to see what’s happening between US and Japan. Is Trump going to massacre one of US’ biggest investors together with all the rest? If the answer is yes, then Japan could stop the current and planned investments into the US and I don’t know where USDJPY or JPY crosses could end up in that case… 10% lower? Possible.
-CHF is bought. Being relatively outside all of these troubles, CHF will see more safe haven flows coming . The basketball player at the SNB will have a hands full in the next week weeks!
-Equity markets would probably have their worst week of the past years, yields may tumble as growth forecasts will get a rightful beating.
-Oil will be more gradual but if there’s no consensus of any kind could see more pressure and take CAD, MXN, NOK lower and ZAR a bit higher.
-Scandies tend to suffer in a risk off environment.Not good for my SEK longs.

If there’s love in the Argentinian air:
Then we can partially reverse above scenarios. Partially I say as we’ve experienced enough times now, is that nothing is done with the Trump administration as long as it’s not all put in ink and rubber stamped. So the initial expected moves may stall at one stage for reassessment imho.
-USDCNH should dive back under 6.90 towards 6.83/85 for the initial move, maybe deeper if the meetings signal a close to finalised deal.
-AUD rallies, could reach 0.7450 in not to far a future. The kiwi will be pumped up with even more steroids.
-EUR should test the top end of the latest box around 1.15 and reassess there. A break of 1.1525/50 will need a relative strong commitment that tariffs won’t be imposed any time soon.
-Risk is taking off. USDJPY back to 115 and JPY crosses rally. EURJPY 133 Sept high is a very plausible target. IF all things are positive, expect Mrs Watanabe to break the piggy bank and buy AUDJPY, NZDJPY, USDJPY etc.
-CHF will follow in the distance, USDCHF back above parity, EURCHF probably back into the 1.15s.
-Equity markets rally across the world. Yields move higher again on a better growth outlook.
-Oil will still be the unknown as meetings take place next week but an initial rebound should be seen , underpinning CAD and MXN and NOK to a certain extend.
-Scandies tend to perform well in a risk positive environment. GOOD for my SEK longs.

One small caution for the more medium term then: Yields creep back up. And here’s a possible thorn for EM…. What if USD yields take off as growth prospects are improving? How high can they fly before it becomes a problem again? Don’t forget there’s a big amount of external USD debt maturing into 2019 for the EM after 2018 was already a stressful year. The initial reaction for EM will be positive as business outlook improves in case the G20 goes well but I’m cautious about the viability of the move. Therefor I reckon that if (I’m using this benchmark as an example)10yr US rates would remain contained to 3.25/50% it would be sort of OK as better growth, more revenues etc will come to the rescue. If the world is really a better place and these rates would start to tackle the higher end of the 3s up to4%, we may reach a tipping point for the EM currencies qand fall back into our earlier 2018 stress scenario. But that’s one I’m not fully out yet. I ‘ll leave that one just as a caution as I said.

So folks , that’s my approach for what’s to happen. Trade I will as it’s my blood but I will be selective and let the algo’s burry themselves, not with my money, before diving into deep water.
I hope that helps a bit .