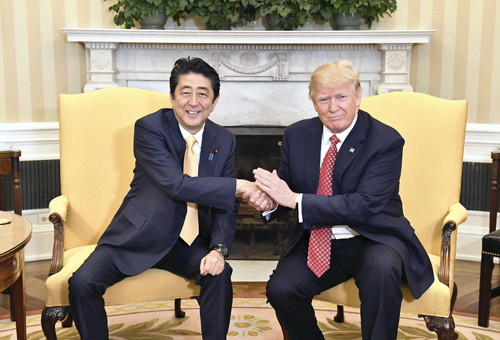 Here an interesting article by the Nikkei how the negotiations around the steel and aluminium tariffs have been coupled to a side deal on competitive currency manipulation . The deal itself is of course a big relief for South Korea but the big victory for the US is that is succeeded in getting a non intervention side pact signed (details still to be negotiated) to prevent South Korea from devaluing the Won vs USD in order to keep their exports cheap and flowing .

This could be where the Don tries to take Abe by the nuts on his visit to the US 17-19th April. Initially the meeting was supposed to be about NK: sanctions, defence, joint interventions in the region. But in the meantime Japan saw the grass cut right under its feet by the major actors in the play ahead of this meeting. SK , US, China and NK itself are setting a scene of dialogue. OK Japan is in the loop with NK talks as well from today but not as a common front with the US but possibly stand alone as things are panning out with SK as the broker.

Latest on the trade was Trump’s comment about the upcoming meeting: “I’ll talk to Prime Minister Abe of Japan and others — great guy, friend of mine — and there will be a little smile on their face,” Mr. Trump said. “And the smile is, ‘I can’t believe we’ve been able to take advantage of the United States for so long.’ So those days are over.”
In other words: “Get ready to do something about the 70B $ yearly deficit we have together and look at the Korea deal : stop deflating the JPY with that monetary policy while we’re at it” .

Even though the impact of Japan’s monetary policy on JPY has diminished lately, it’s been undeniable over the years and without, who knows where USDJPY would be today (below 80 before Abe) .Trump has been calling Japan manipulators for years and he wants a weak USD, we all know. I am expecting at least a serious and loud try by the US negotiators to get any pact  to be accompanied by the same side deal. If it’ll succeed, that’s less of a certainty. Although Japan exports a lot to the US, the steel exports only account for 5% of Japan’s production and aluminium less than 1,5%, although accounting for 10% of the exports. Abe could try and get away with bringing some company managers’ promises for investments .

Where it turns around are the cars really, 2/3 of US’ deficit with Japan is found there .US wants a free trade deal . Japan doesn’t apply tariffs on US cars but discriminatory taxes, standards, entry procedures, distribution structures, and zoning requirements make it extremely difficult for a foreign car maker to run a permanent business there.All these rules and import costs increase the price of a day to day US car in Japan by nearly half compared to the US retail price.
But there Abe also has a stick behind the door as Toyota, Honda etc promised billions of USD investments in the US over the next 5-10 years last year at Trump’s inauguration.In addition large Japanese companies such as Softbank also promised huge investments in the years to come.

Maybe these investments could soften Trump’s stance when negotiating with Japan but we’ve already seen he’s not afraid of putting the maximum pressure in the balloon with whoever before considering taking some air out. In my opinion the runup and the meeting could send shivers through the JPY as I expect the US to try and put pressure in order to obtain a SK style deal on the currency. It happened in the 1995 before the US-Japan car deal got signed already once. Trump has likely read the script ….